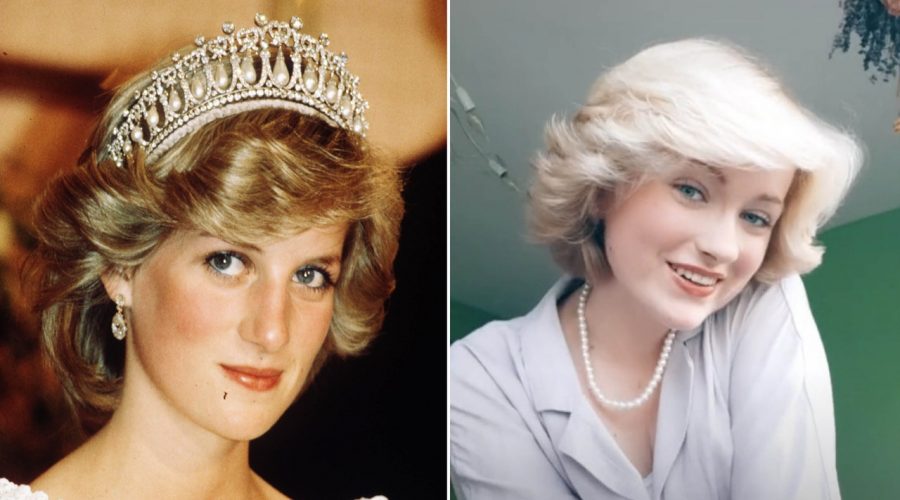 It's no secret that Princess Diana stole the hearts of people everywhere with her kind, charitable soul and impeccable style. Every so often a picture of the late icon wearing a pair of biker shorts and a sweatshirt, her little black "revenge" dress, or another one of her many notable fashion moments will go viral as people yet again praise and remember her effortless glam and street style. Plenty have recreated these and other looks of hers (including Hailey Bieber for Vogue Paris in August 2019) to honor her legacy. Now, TikToker Rose Van Rijn is going viral for basically transforming into Diana's twin with her latest hair tutorial.

On May 7, Van Rijn shared the viral video with her large following of nearly half a million TikTokers, who were immediately shocked by how much she resembles Princess Di. In fact, the resemblance is so striking that she could give Kristen Stewart, who is playing the beloved royal in the upcoming film Spencer, a run for her money.  The tutorial begins with a screenshot of an old, illustrated guide on how to achieve Lady Diana's bouncy hairstyle.

Van Rijn found the illustrated guide on Pinterest and decided to use it as the inspiration to cut her hair in mid-April, which she also posted on TikTok. She cut her shoulder-length hair into a chin-grazing bob with bangs and the perfect amount of layers. To create Diana's hairstyle, Van Rijn curls her hair away from her face section by section using a blowdry brush and heat protectant. (The GHD Rise Hot Brush is a great option.) Then, she runs a paddle brush through her hair before setting everything with hairspray.

For the final reveal, she changes out of the gray floral shirt into a gray blazer with a pearl necklace to look just like Lady Diana. Van Rijn is clearly a huge lover of vintage beauty. A scroll through her Instagram will transport you to the boogie-down era of the '70s. She wanted to praise Diana's style with this video and she clearly succeeded. "Diana is long gone but I hope to carry on her legacy, even if it's just a bit by wearing her hairstyle again and showing it to other people on the internet," Van Rijn tells Allure. "It's such a beautiful sophisticated cut, and I love it." We do too.