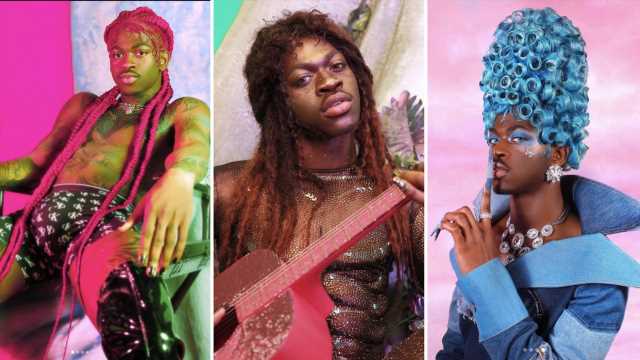 The entire world damn near stopped when Lil Nas X released his highly-anticipated music video for "Montero (Call Me By Your Name)" in the middle of the night on March 26, and the 21-year-old did not disappoint — at all. Pole-dancing into hell in black latex thigh highs, a sensual lap dance for Satan himself, and a larger allegory for how queer people are too often demonized for their sexuality were just a few of the things the rapper-singer gave us in this new video. And it doesn't stop there: The semiprofessional social-media troll also blessed fans with some breathtaking beauty looks that we can't stop obsessing over.

The video starts off with the viewer traveling through a lush and colorful paradise as Lil Nas X narrates in the background. "In life, we hide the parts of ourselves we don't want the world to see. We lock them away. We tell them no," he says. "We banish them, but here we don't. Welcome to Montero." We then view a snake slithering towards the star, who is sitting in front of a tree, strumming a few notes on a glittery, pink guitar. 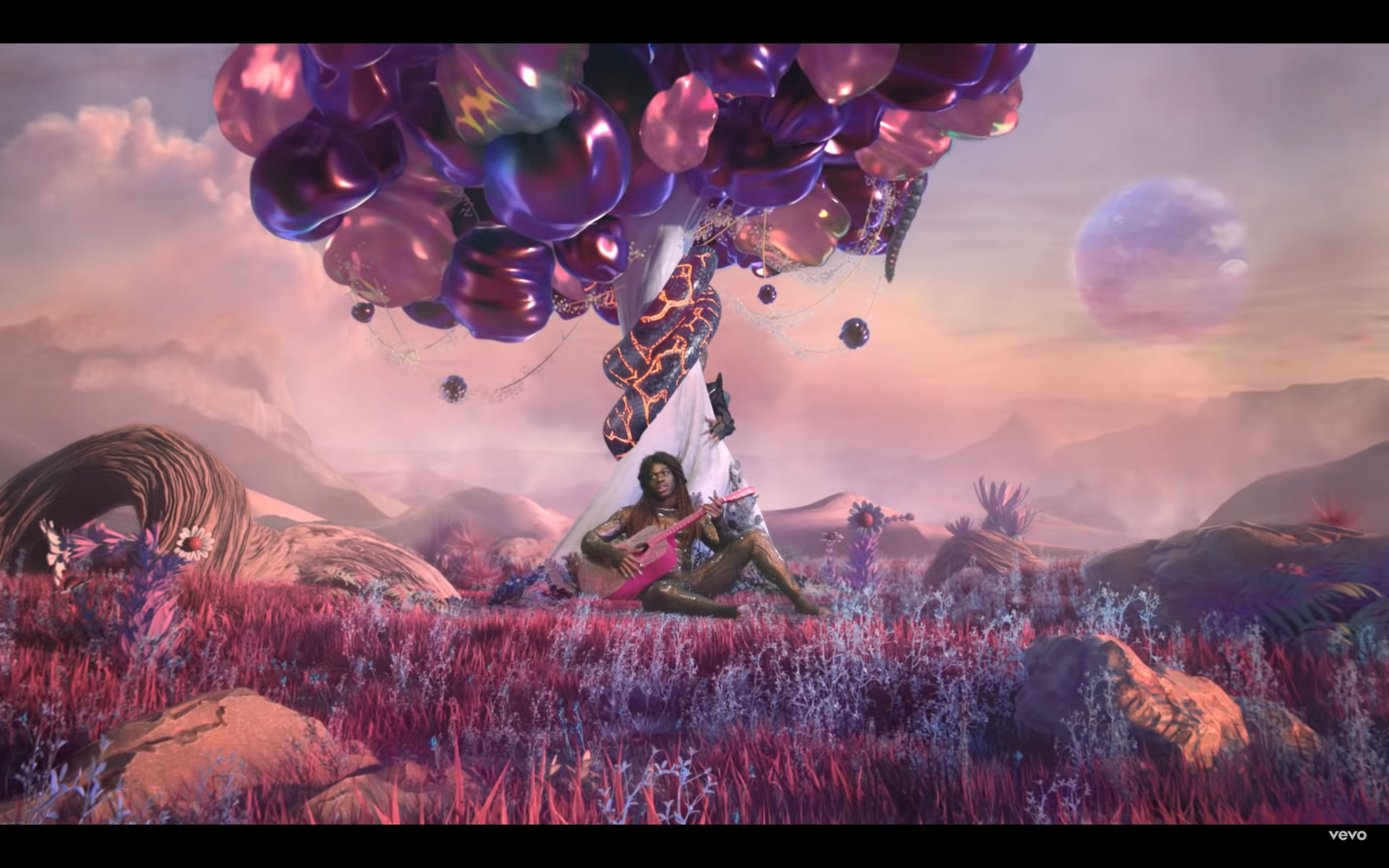 He's dressed in a black mesh jumpsuit with silver sequins, matched by his medium-length nails. His usual 'fro is gone and replaced with an ombré faux-loc wig that fades from dark brown to a lighter cinnamon shade. His face is pretty bare except for faux freckles across his cheeks and nose; makeup artist Anthony H.Nguyen takes the trend to the next level with tiny little shimmery gems instead of makeup or henna. 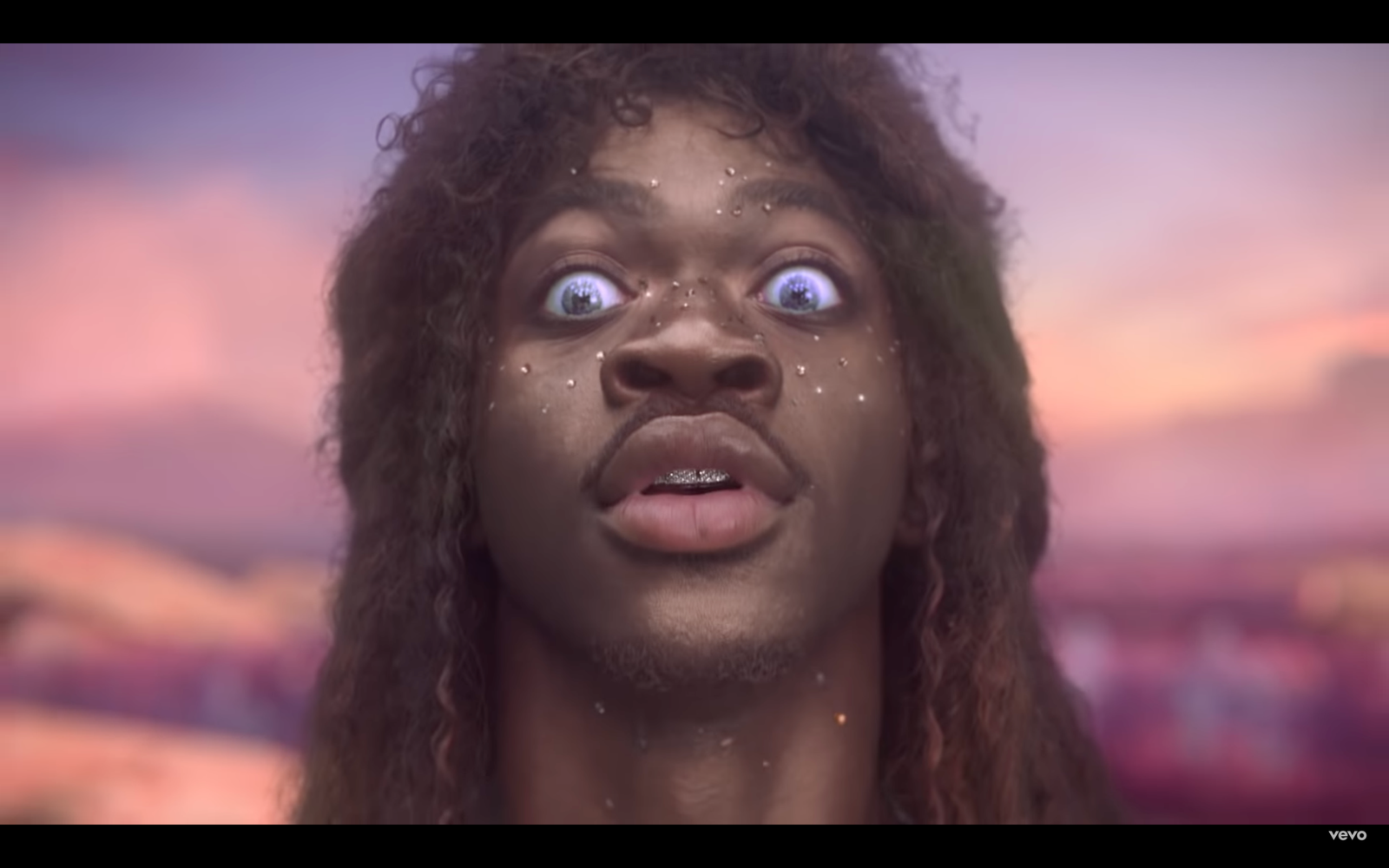 As Lil Nas X lies there singing peacefully, Satan, in the form of the snake, crawls up the tree to "tempt" the young rapper and succeeds. The two share a kiss before Satan proceeds to lick his body. Then, all hell breaks loose for Lil Nas X as we transition into the next scene: a trial for his crimes. And it truly only gets even better from here. 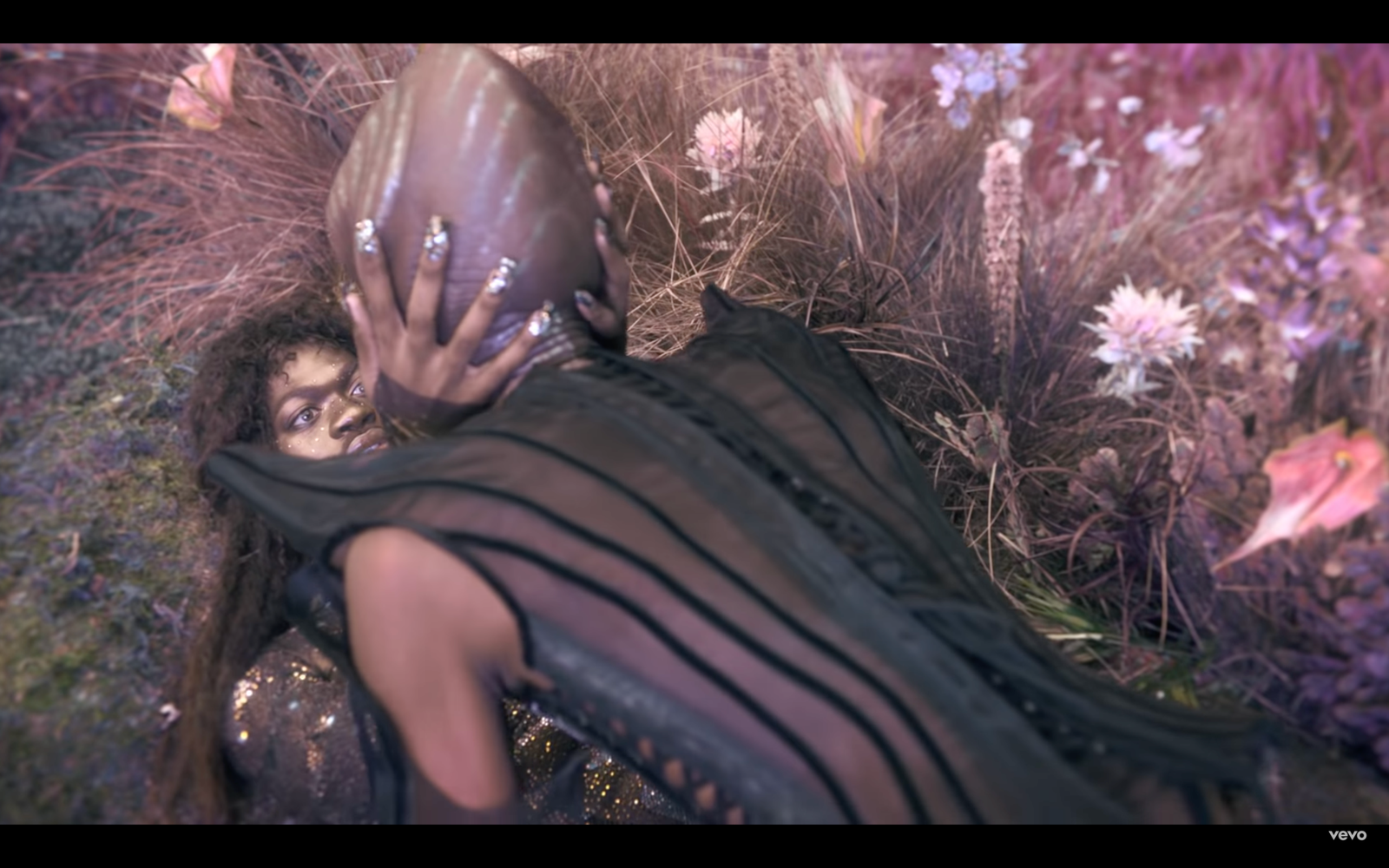 As he is being led into the trial chambers, his ombré faux locs are replaced with a perfectly coiled pastel pink pixie cut. His bright-yellow graphic liner is simple but still packs a punch to contrast his pink fur and icy outfit. The two guards leading him (also played by himself) are dressed entirely in blue denim outfits with matching makeup and hair that would rival Marie Antoinette's most extravagant hairstyle. Light and dark blue shadows were expertly blended on both guards' eyes while silver butterflies sit on their left cheekbones to match their silver jewelry. 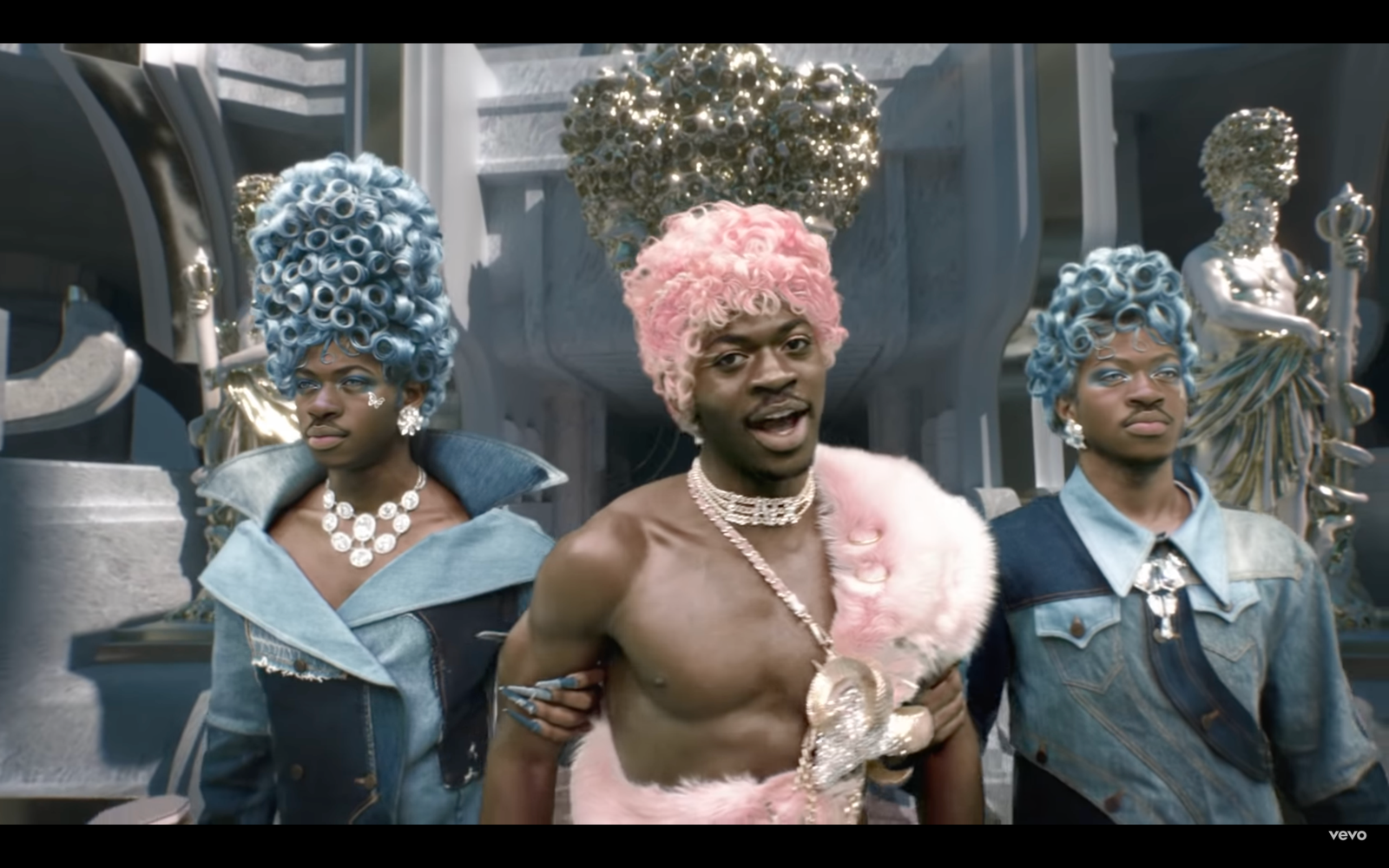 These icy blue looks are it. Hairstylist Evanie Frausto's work here could certainly compete with the over-the-top hairstyles and hair sculptures from the best of the best at the Detroit Hair Wars. One guard's hair has several ringlets piled on top of his head with a few long baby hairs swooped across his forehead. The second hair structure towers over Lil Nas X's head in a bunch of ringlets in the same baby-blue color. (Honestly, I don't know if I'm more excited for these looks or the many fan recreations to come.) The judges for the proceeding are dressed similarly with gorgeous blue towers of hair, but we can’t forget their manicures. Each judge has lengthy, stiletto-shaped nails wrapped in denim, and if there’s anyone who can pull off super long denim nails, it’s definitely Lil Nas X. The next scene cuts to Lil Nas X ascending toward a flying figure who could be interpreted as God or an angel. But suddenly, a pole rises from the ground, and his entire look changes as he grasps it. Now, descending into hell while dancing on the pole, his body becomes covered in tattoos, and he only wears Calvin Klein boxers. His hot-pink and red hair is cornrowed into four braids that hang toward his butt. Several baby hairs are swooped, looped, and locked into place on his forehead. His face is seemingly bare, but his black nails complete the more sinister look. 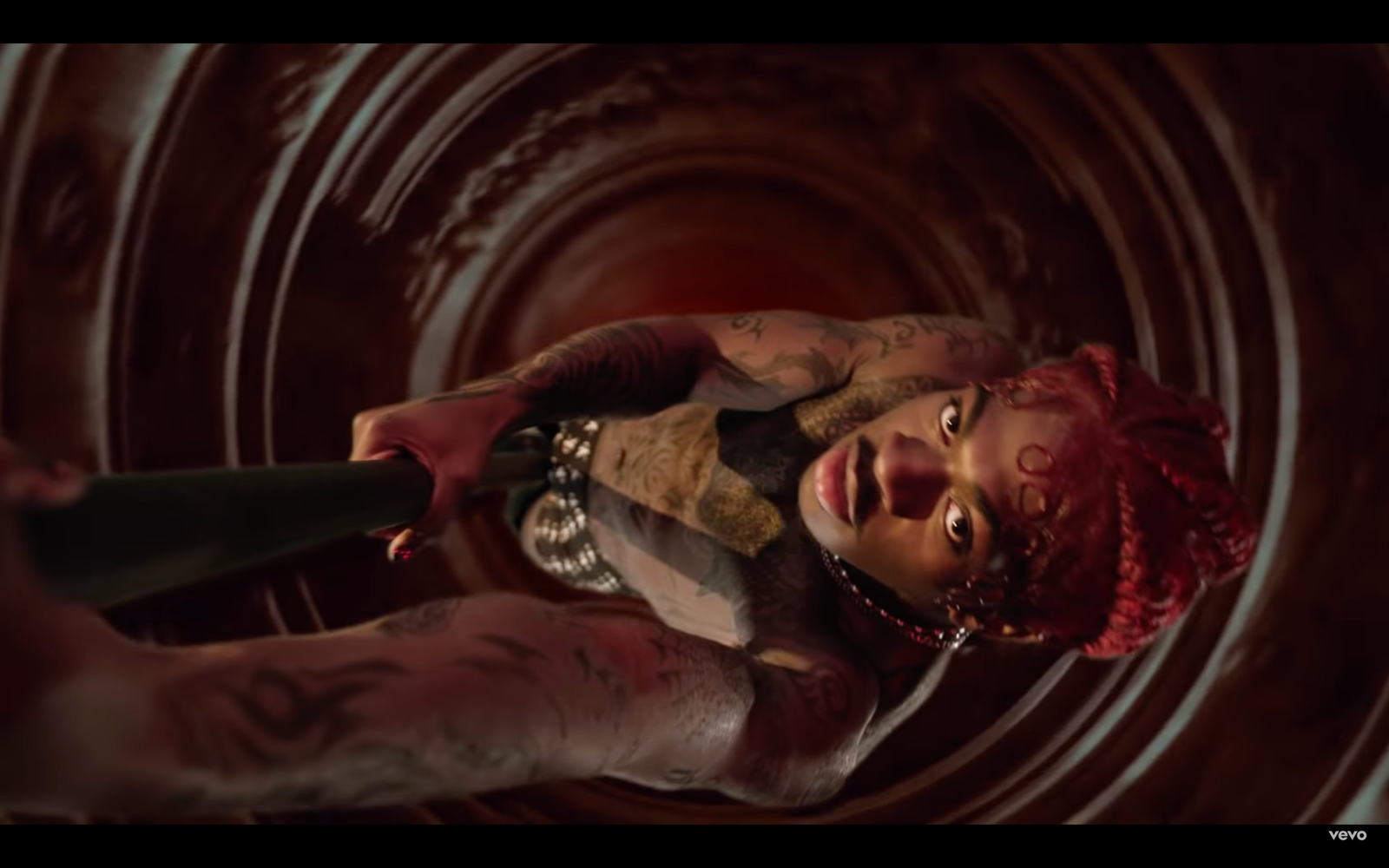 For the grand finale, he gives Satan a sensual lap dance, before killing him by snapping his neck and taking the braided crown for himself to become the ruler of hell. His eyes glow and black wings spring from his back as the video ends. To put it simply, Lil Nas X did what the fuck he had to do. Right after releasing the new video, he shared a love letter to his 14-year-old self. He writes about the promises he had made then to never come out publicly and keep his homosexuality a secret. But that time is over now, he declares.

"People will be angry, they will say I'm pushing an agenda. But the truth is, I am," the letter reads. "The agenda to make people stay the fuck out of other people's lives and stop dictating who they should be." Couldn't have put it better myself. Job well done, Montero.