Have you ever been told to keep your body guessing? That’s because adding new moves to your routine can help to promote gains. Fortunately, whether you’re a CrossFitter, bodybuilder, or just a regular joe in the gym, chances are you’ve never put together the moves in this kettlebell killer series, courtesy of Eric Leija (a.k.a. Primal Swoledier).

In this three-move series, which Leija performs alongside fellow trainers Michael Vazquez and Jay T. Maryniak, you’ll perform 12 reps of each exercise, resting 15 to 30 seconds between movements, and repeat for a total of 5 sets. Ready, set, grow.

‼️Single Kettlebell Killer‼️ . Get after this circuit I crushed with @michaelcvazquez and @jtm_fit 🔥 . 5 sets 12 reps each move 15 to 30 seconds in between sets and exercises for quality reps . #train #kettlebell #workout #onnit . There’s still time to take advantage of Black Friday deals at EricLeija.com! . ⚡️Use code “BF35” to get 35% off site wide⚡️ . All online video programs, my online video kettlebell course, online video daily workouts, and apparel are on sale! . Link in my bio! . Song: Going Bad (feat. Drake) by Meek Mill

The first move, a pushup flow, is essentially a lateral jumping pushup with a reach, using a kettlebell as an anchor. Begin in a high plank position, with your right palm pressed into the body of the bell instead of the floor. Lower down into a pushup, and as you come up shift your weight entirely into your right hand. Draw your left hand up off the floor, bringing it straight forward. Hold here for one second, before returning your hand to the ground.

Next, do another pushup, but this time as you ascend, explode laterally into the air to the right. Move your left hand to the bell, and shift your right hand to the floor so that when you land your wrist is stacked under your shoulder. That’s one rep. Repeat for 12 total reps.

The key to this flow is body control—which means your core has to be engaged the entire time. No exceptions. Try practicing the sequence without the kettlebell to start, so you can get used to the movement and build up midline strength.

After this next movement, the last in the circuit, expect an arm pump. Grab a light kettlebell by the horns with both hands. Kneel down with your knees slightly wider than hip-width. Tuck your pelvis and brace your core, then do a bicep curl. At the top of the rep, press the bell overhead, holding at the top position. Next, up do an overhead tricep extension. Return to start, and repeat.

If at any point during this 5-set workout, your core starts to cave and your form starts to go, lower the weight, or take extra rest between the movements. Remember, as Leija writes in the caption, the goal here is “quality reps”. 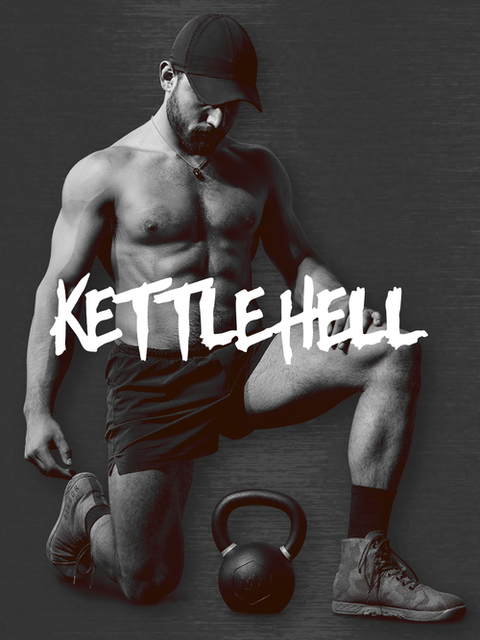 Want more kettlebell workouts from Leija? Check out his Men’s Health Kettlehell program (now available on our All Out Studio app), which is designed to burn fat and build muscle with just one kettlebell.