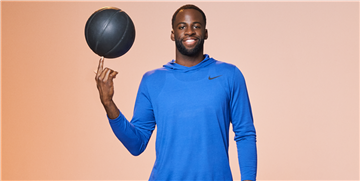 Summer 2019 was a wild one for the National Basketball Association. Kevin Durant and Kyrie Irving went to Brooklyn! Kawhi Leonard and Paul George went to the Clippers! Anthony Davis went to the Lakers! Draymond Green went…actually, Draymond Green sat out the whole player movement portion of the offseason. While the former Defensive Player of the Year could have been the marquis player in next summer’s class, he instead chose to sign a 4 year, $100 million dollar maximum contract extension to remain with the team he’s been with his whole career—the Golden State Warriors. Sitting out the crazy parts of the year’s offseason meant that Green had the time to focus on things he’s passionate about; this summer, that was fitness, and he’s taken some of that money to open three Blink Fitness gyms in the Detroit and Chicago areas.

When Green was a kid, growing up in Saginaw, Michigan, he didn’t have access to gyms. In fact, the first time he ever saw gym equipment was when he was a freshman at Michigan State, gearing up for his first season playing basketball for Coach Tom Izzo. “I remember my first time getting on a stairmaster—I was overweight—and the pedals went straight to the floor,” he says. “I couldn’t even keep them up; I had never seen a stairmaster machine.“

So he was inspired, eventually, to make it possible for not just any gyms, but affordable gyms to be available in neighborhoods similar to the one he grew up in. In recent months, Green has opened Blinks in Warren, Michigan, Redford, Michigan, and Evanston, Illinois—all small towns that could easily be home to, well, the next Draymond Green. “Being able to offer a helping hand in helping others, to help their loved ones, is important to me,” he says. He doesn’t plan on stopping at those first three, either—the plan right now is to eventually open 20, with the possibility of even more.

And while physical fitness has always been important—transforming his body is what helped him become the NBA superstar he is today, after all—he keeps a keen eye on the mental aspect of both his own wellness and the league at large, too. This summer, the NBA announced new mental health guidelines for all 30 of its teams, which include having 1-2 mental health professionals retained full-time per team. Green deeply praised the efforts of Adam Silver, the NBA’s commissioner who spearheaded the new policy. “It always floats under the radar, so I think it’s important to be in a great mental state when playing this game at such a high level,” the versatile 6’7” forward says. “It’s something that has to be taken seriously, and I think it’s definitely been taken seriously in our sport.”

Green also credits the idea of ‘wellness’ and self-care as a one of the pillars to living life the right way. “Wellness is very important,” he says. “It’s one of the single most important things because it directly impacts everything you do in your life and so obviously we’re talking from a health and wellness standpoint, but just wellness overall is extremely important.”

There were also a few aspects of Green’s summer that have been left up to mystery. While he was spotted with LeBron James on the set of the upcoming Space Jam 2, he’s still playing coy about what’s going on with that whole thing (“I’m not sure I can answer that,” he says when asked about the rumors).

What he definitively sets the record straight on, though, is the nature of his in-game trash talk. Just about from the moment he first entered the league, Green has been one of its most animated and exciting players to watch—if you’re a fan, you love to root for him, and if you’re an opponent, you hate going against him.

Part of that is due to his defensive dominance and versatility, but another part is his reputation as one of the league’s most effective trash talkers. With a few months off in between seasons, do any ideas for ways to get in anyone’s head start forming in the back of his head? That answer is the most definitive no of any.

So that settles it—Draymond Green, just as versatile at talking trash as he is at defending every single person on the court.