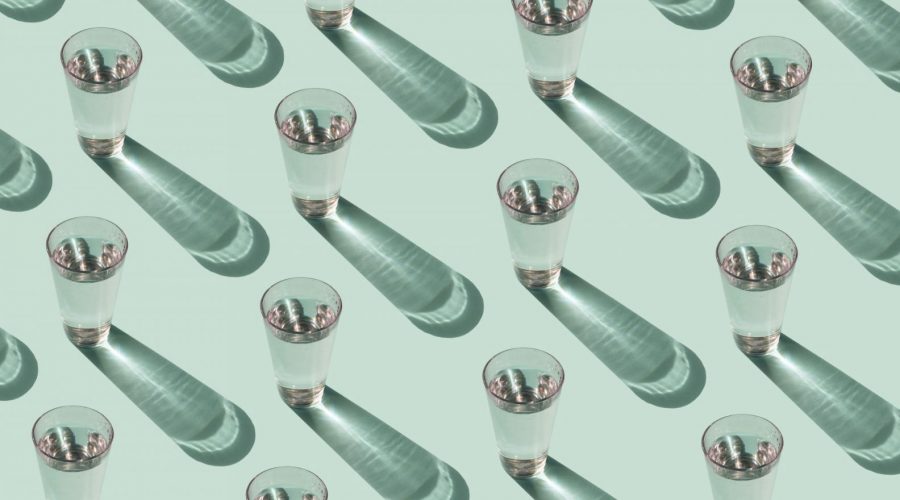 In an attempt to ‘become her best self’, writer Alice Barraclough tried drinking eight glasses of water a day, but how it affected her body wasn’t what she was expected.

We live in a world in which water seems to be the answer to everything. Want clear skin? Drink water. Feeling lethargic and unmotivated? You most likely need water. Need to get rid of a headache? Yep, drink more water. Hydration, it seems is the solution to all our problems – if only it was that easy.

Why is it that we’re so obsessed with staying hydrated? How many times have you heard the elusive fact floating around that the key to good health and hydration is drinking a total of eight glasses of water a day. So, that’s exactly what I tried to do. But throughout my experiment, I couldn’t help but wonder, is drinking all this water actually that effective or even healthy? And when did water become the go-to treatment for everything from exhaustion and headaches, to acne and digestive issues?

Where did this well-known, popular recommendation of drinking eight glasses of water (about 2 litres) a day come from? “The eight-by-eight rule is an American concept and stems from advice given in 1974 by nutritionist Dr Fredrick J Stare,” explains registered nutritionist Clarissa Lenherr.

How to drink water during a workout

However in the UK, the NHS recommends six to eight glasses, she says, “or 1.2 litres or more. But many people forget that Dr Frederick J Stare also stated that hydration comes from foods too.”

We’ve been led to believe that the more we drink, the healthier we will be. Before the pandemic hit, we’d carry around our trendy Chilly reusable water bottles with us everywhere – downing them and refilling them with delight. Water bottles littered every employee’s desk in the office (ah yes offices, remember those?) as if the slightest sign of dehydration might decrease our attention span, while gym-goers appeared to replenish water as fast as they sweated it out.

As a child, I wasn’t allowed to have fizzy drinks or juices – so I was used to having plain old boring water. Lemonade and Coca Cola were reserved for special occasions, such as birthdays and on Christmas, and drinks with added electrolytes (Powerade or Lucozade Sport) were permitted only when playing sports. Apart from a couple of years at university where I abused my body with Snakebites and Vodka Cranberries every week at the student union, I’ve mainly survived on just coffee, tea and water.

Admittedly, I too have fallen pray to the ongoing obsession with hydration and have often caught myself saying, ‘I’m so dehydrated’ when I quite clearly wasn’t. I’ve blamed a run-gone-wrong (you know, when you start getting those awful stomach cramps about five miles in and desperately need the loo) as being down to dehydration and sweating out all my body’s fluids far too rapidly.

Drinking more water: does having eight glasses of water a day really reap all the benefits?

Being hydrated, it seems, has become the mark of a successful person. Someone who drinks eight glasses of water must surely be someone who has their shit together – as ludicrous as I know that sounds. So, I decided to put the supposed ‘cure-all’ elixir to the test. For seven days straight, I attempted to drink loads and loads of water to see if it would, in fact, result in glowing skin, increased energy, speedier recovery and good digestion.

Because I start every morning with a coffee and like to enjoy a tea as well, I wondered if those beverages could count towards my ambitious target. “Coffee and tea do contribute to your daily intake of fluids,” she explains. “Any beverage with caffeine may have mild diuretic effects, but if keeping under the maximum recommendation of 400mg of caffeine per day, then this should not impact your hydration levels. And drinks such as orange juice also contribute to your hydration levels – but be mindful of consuming juices and fizzy drinks with high levels of sugars in them.

Spoiler alert: I found it impossible. In fact, so impossible that I didn’t  even succeed in drinking eight glasses of only water – so I incorporated coffee, tea, juice and even alcoholic beverages as part of my liquid count. This is what my intake looked like for the week:

Water myths debunked; How much to drink and when to drink it, plus what the real benefits are

Day 1: 7 beverages
Two cups of coffee, one breakfast tea and four glasses of water throughout the day.

Day 2: 8 beverages
Two cups of coffee in the morning, followed by a tea and four glasses of water (one with a Vitamin C tablet in) and a glass of red wine (that counts, right?).

Day 3: 6 beverages
One coffee, one breakfast tea, three glasses of water and a gin and tonic in the evening. I really struggled to drink more water on this day but I just couldn’t down any more after my third glass as I felt like a drowned fish.

Day 4: 7 beverages
One coffee, one orange juice, one breakfast tea, three glasses of water and an evening tea.

Day 5: 8 beverages
My most successful day! I started the morning with one coffee and swapped my juice and tea for a whopping six glasses of water, followed by one tea before bed.

Day 6: 8 beverages
One coffee, one pineapple juice, one breakfast tea, and five glasses of water – not as many glasses of water as yesterday, but still loads more than I would typically have.

Day 7: 7 beverages
One coffee (you can see these are non-negotiable), two cups of breakfast tea, three glasses of water, and berry and banana smoothie.

As hard as I tried to drink 2 litres of water a day, I found it too difficult. I set myself alarms on my phone, drew pictures of glasses on my to-do list to tick off throughout the day, and even played around with the idea of tracking my consumption with a special mobile app. Nothing seemed to get me up to that magic number eight.

Perhaps the fact that it’s currently winter had something to do with my struggle or that I spend most of my day sitting at a desk focussed on work that I forget to keep drinking. I imagine that living through a national lockdown in which I’m not physically moving as much and therefore, not as thirsty also played a part. Either way, I felt deflated at my dismal attempt of downing litres of water in a quest to be my best self.

But then Clarissa reminded me that how much you need to drink differs from person to person: “For some this may be less than 1.2 litres while for others this may be more”, and over hydrating doesn’t help either – as you’ll just pee it out.

“Like dietary intake, water intake is individual. It is all dependent on age, body mass, activity levels, and diet. But our governing bodies need to set guidelines that apply to everyone like they do with fruit and vegetables. This helps to incentivise people with achievable goals to support health – and we know drinking water is good for us,” she says. “Aim for eight glasses of water per day, but note that if you have one coffee, one tea and a bowl of watermelon, six glasses will do just fine.”

“You can also contribute to your hydration levels by eating lots of fruits and vegetables. In particular, spinach, cucumber, watermelon, mushrooms, oranges, broccoli and more. In fact, it is suggested that a fifth of your daily fluid intake comes from fruits and vegetables,” adds Clarissa.

Which means that technically, I did in fact hit the recommended hydration levels – huzzah!

So did I feel like a new person in the end? If I’m honest, I can’t really say that I’ve noticed any difference in my skin, mood, energy levels, workout performance, muscle recovery or alertness which was a little disappointing. The only major impact I noticed was that drinking loads water forced me to get up in the middle of the night, not just once but a few times, to pee. I was running to the toilet far more times throughout the day to alleviate my full bladder. But I definitely wasn’t complaining about feeling dehydrated.

Benefits of lemon water: is the hot drink really as good for you as people say it is?

If you want to up your water intake but are struggling to, Clarissa suggests trying not to drink too close to meals, “as this can make you feel overfull and sluggish, and not wanting to drink water”. She also recommends setting yourself deadlines to have a certain amount throughout the day and flavouring water with berries, cucumber or herbs for taste. “Why not make a challenge with your flat mates or partner to drink one glass of water every hour? Or keep a water bottle in front of you to remind you to drink more often.”

If you haven’t hit your daily quota, don’t stress – and remember, the delicious beverages you thought of as dehydrating, such as coffee and tea, are actually still hydrating. Cheers to that!

Related posts:
02/24/2021 Fitness Comments Off on “I tried drinking eight glasses of water every day to see if I would really benefit from it”
Diets News