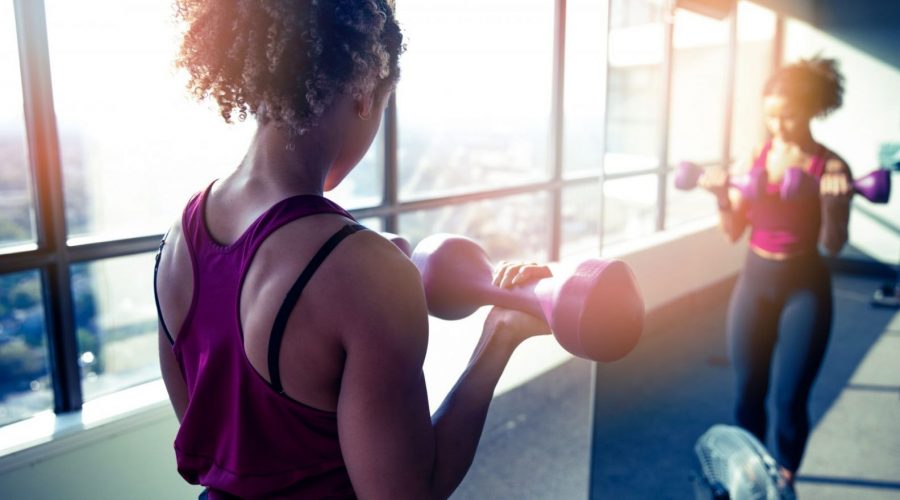 Like so many of us, writer Kedean Smith found herself moving less during lockdown. As a result, she found herself occupying a bigger body. But a 30-day fitness challenge helped her to accept her body in all its glory…

Those were the first words that left my mother’s lips when I went to visit her in Jamaica in 2017. It’s an island where weight is seen as beautiful, where women in all their shapely, cellulite glory are appreciated and the unspoken motto is ‘the bigger the better’.

In Jamaica, weight represents the unlikely duo of wealth and good health. It means you have the ability to feed and take care of yourself well. Yet, despite having grown up in this culture, I still took my mother’s words personally.

I’ve been tall and slim my entire life, and as such, had never thought about weight. When I hit my late 20s, however, my body started to change– and I fought against it.

Cardio vs strength: “Strength training has changed how I view my body image, mental health and exercise goals”

My western upbringing was cancelling out everything good that weight represented in Jamaica. In Europe and other parts of the western world, women are taught from a very young age that gaining weight is bad. Our underdeveloped psyches are bombarded with one overly-edited shot after another of our favourite singers, actors or Instagram baddies.

It’s hard to escape the toxic cycle of comparison when the hard truths of what bodies really look like in everyday life sans FaceTune have somehow become undesirable.

2020: the year of poor self-care and fitness challenges

Fast forward to 2020, and there we all were, in the grips of a worldwide pandemic and as a collective, people were moving less and comfort eating more – myself included. As I watched the world get turned upside down from my home in west London, like many others, I developed a routine of inactivity and random bouts of boredom eating.

I went from sitting hunched over at my work laptop, to the fridge in the kitchen, to running to the off license down the road for yet another bag of crisps. Rather than cooking and having to deal with supermarket queues, I relied on Deliveroo for my dinners. This vicious yet oddly soothing cycle continued for months as the world got worse and the news got darker.

But 2020 was also the year of online challenges, which seemed to have a vice-like grip on our social media feeds. Unsurprisingly, I found myself turning to a 30-day fitness challenge in a bid to break out of my rut. I’d missed the whole Chloe Ting craze the first time around so decided to subscribe to her channel, dug up an old yoga mat from the storage closet and dusted off my workout gear.

I decided that I’d follow her workouts every morning and hoped that by moving more, I’d choose to eat healthier.

Fighting against my body and the idea of growing up

After a week of following YouTube, I decided to start posting my workouts on Instagram. Every day, I filmed a 12-second clip at the end of a session. Almost immediately, I found myself inundated with congratulatory responses; people applauded me simply for deciding to move and doing it rather than trying to reinvent the wheel.

While work demands, period pains and socialising hit my consistency in different ways, I tried to pick myself back up after every missed session.

It was halfway through the 30-day challenge when I finally came to the realisation that I’d been fighting against my body for the past few years. When did I stop being happy with being me?

The truth was that I’d never really hated or looked after my body; focusing on weight had meant that I’d simply relied on my genes until I hit 27 and my body started changing according to my lifestyle.

My mum had called me ‘fat’ – and after years of trying to hold on to the old version of me, that hit a nerve.

Outgrowing attachments to my ‘old’ body

“You look like you’ve got fat,” was said innocently enough but triggered my own feelings of poor self-worth that were based on an idea of what healthy looked like. I was thinking of my high school body as my ‘best’ body – rather than accepting and celebrating the body I was growing into.

Despite being nearly 30, I was hanging onto what I looked like during a period of my life in which my metabolism was faster and I was generally more active.

By day 20, after a sweaty workout in the London sun, I acknowledged my grown woman body. It wasn’t failing me or demanding that I do 100 sit-ups to regain the svelt stomach I had at school; it was asking me to embrace how much it’d changed.

After my 30-day challenge, I realised that I was finishing with a renewed respect for my body rather than a smaller one.

My mother’s words rang true; she was right, I had gained weight… but so what?

It took a 30-day challenge for me to realise that I had grown up, and in doing so, came a new and equally beautiful body that would help me weather many storms. There is a newfound strength in finally acknowledging the curves that now span my 5’9” frame, and understanding that I needed to continue loving myself just as I am was powerful.

Related posts:
10/20/2021 Fitness Comments Off on “How a 30-day fitness challenge finally helped me to accept my grown-ass woman’s body”
Diets News