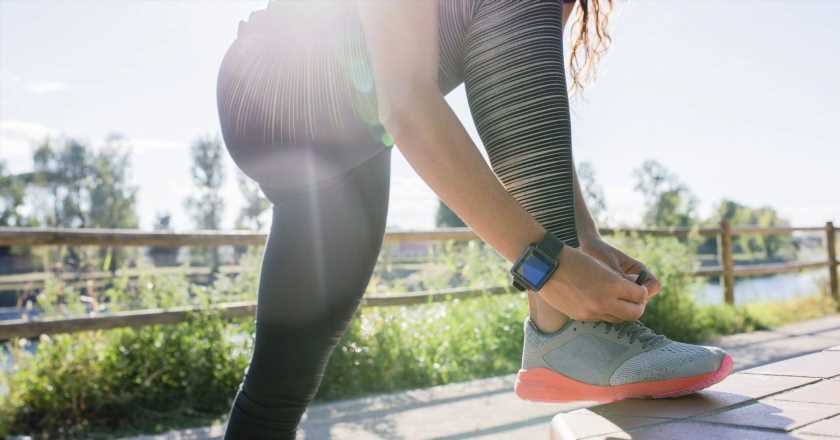 If you don’t feel confident enough to run wearing shorts even in the middle of summer, you’re not alone, as Strong Women editor Miranda Larbi has been finding out.

When it’s this sticky and humid, everything feels difficult. And last week, it was especially scorching. Even so, I managed to head out for a jog dressed in my trusty vest and shorts, and it was on one particularly hot canter that I realised every other female runner was wearing leggings.

No matter how hot it gets, it seems like some of us just aren’t willing to ditch our leggings. Unlike men, who need no excuse to run bare-chested (at least in east London), women are far more nervous. In fact, when we put it to our Strong Women readers on Instagram, a whopping 72% told us that even during a heatwave, they wouldn’t walk or run just wearing a sports bra and bottoms. And over half said that under no circumstances would they stop wearing leggings to work out in.

“I don’t feel comfortable enough in my own body to run in my sports bra,” said Mercedes. “Also, I don’t think I’d feel safe from catcalling and men staring. I don’t think I’d be attacked, I just think I wouldn’t be able to enjoy it with men staring and making me feel so self-conscious and watched.”

What going back to the gym is really like: from losing strength and confidence to facing harassment

Reader Nickie told us that she’d just spent time at a skatepark with her son, where “all the boys and men were topless and all the girls and women were obviously not. For some reason, the insanity of it just hit me.”

In fact, some readers feel so uncomfortable about being exposed that their reluctance to wear shorts goes beyond sports. “My legs are very veiny and pale and have cellulite,” said dietitian Anjanee. And that means that at 31, she’s “never worn shorts in the UK”.

We had messages from dozens of women all saying the same thing. They don’t work out in clothes that are weather appropriate because they’re worried about how they look, the risk of unwanted attention and perhaps the (very real) risk of chafing. And when you think about it, that is absolutely bonkers (for chafing, get Vaseline).

Gayathri told us that the reason she wears layers, even on hot days, is “the fear of being told that I deserve to be catcalled. If I could run in my sports bra and shorts in the privacy of my own garden, I would.”

Harassment and body confidence are barriers to performance

There can’t be a female runner in the country who hasn’t been heckled or ogled by a man while getting in their miles, so the fear is totally founded. And knowing that men are watching or on the cusp of saying something can be confidence destroying. The thing worth remembering, however, is that what you wear bears no correlation to your risk of harassment on a run. Catcalling isn’t actually about letting people know that they’re attractive or fit – it’s simply a powerplay aimed at people who aren’t in a position to yell back (eg, when you’re running, you’re less able to give it back because, well, energy).

As for body confidence, that’s an arguably harder nut to crack. But I tend to remind myself if I’m worried about how I look on a run (and let me tell you, I was once mistaken for a ‘young man’ in Whole Foods by someone who, while looking at my legs, said I was ‘overtly masculine’) that at least I’m doing something for my health – only other runners can judge. And runners don’t judge, because we’re in it together.

It’s worth saying that T-shirts are much better at wicking away sweat and protecting you from sunburn, so if you are a sweaty runner, then you might genuinely find that running with a layer on top makes life easier. But honestly, no one can possibly enjoy sweating in lycra leggings in 30°C. And if we turn ourselves into boil-in-a-bag humans for fear of some loser on the street saying ‘nice legs’, then who really wins?

Wear whatever feels right for you, wherever you are on your body positivity/fitness journey. Obviously, not everyone can or would even want to ditch their leggings for various cultural or religious reasons, and we respect that. But otherwise, please, for the love of happy skin, try running, walking or cycling in a pair of shorts (and a bucket load of SPF) in this heat.

Related posts:
06/20/2022 Fitness Comments Off on Even in a heatwave, we’re nervous to exercise wearing shorts
Diets News