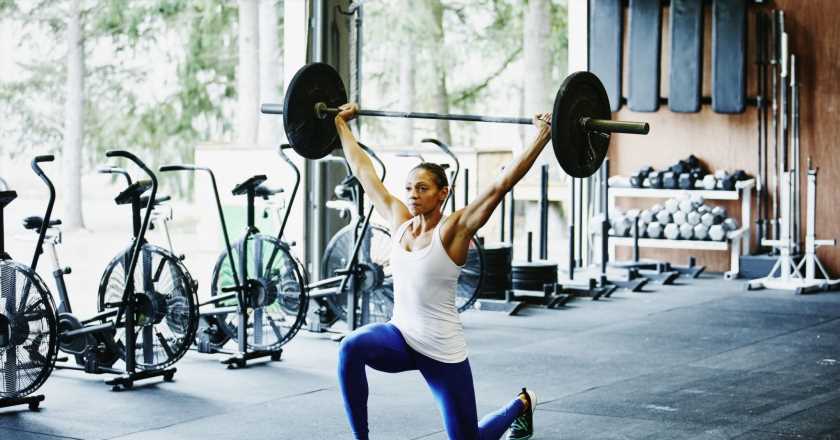 Veganuary doesn’t mean pressing pause on your strength-gaining dream. Here’s everything you need to know about building meat-free muscle mass, with only plant-based foods as fuel.

The idea that you need massive amounts of chicken breast and protein shakes to build muscle is getting a bit outdated now. Search #VeganGains on Instagram and you’ll find almost 700,000 posts that suggest strength building on a plant-based diet is entirely possible. And along with a burgeoning group of vegan bodybuilders and Netflix’s thought-provoking documentary, Game Changers (touting the benefits of a vegan diet for professional athletes), people are realising that physical performance doesn’t rely on nutrients from animal products.

So, what are the facts? Whether your aim is to build muscle or improve strength, we’ve called upon experts to address the myths.

MYTH: You can’t consume enough protein to build strength on a vegan diet

Strength training breaks down protein in the muscle, which needs more protein to rebuild and grow. Considering that animal products contain a much higher concentration of protein than plant-based foods – the average chicken breast will provide you with an impressive 41g – building strength as a vegan may seem pretty implausible, but there are plenty of high protein plant-based food sources.

“All soy products, beans, pulses, grains, nuts and seeds contain protein,” says nutritionist Lily Soutter. “As long as you are following a whole-food vegan diet and are consuming the recommended calorie intake to maintain weight, you should be receiving optimal amounts.”

What she means by “whole-food” is a variety that will cover all amino acids. Animal proteins contain all nine amino acids – essential for building and repairing tissue – while tofu, quinoa and Quorn are the only plant-based proteins to contain a full range. If these aren’t taking your fancy, Lily says that combining foods is a simple solution.

“If two different vegan foods containing plant-based protein are eaten in combination – for example, lentil curry with rice – you are more likely to get a sufficient range of amino acids to create a complete protein, and therefore meet daily requirements to build strength.”

MYTH: You can’t build muscle on a vegan diet

Venus Williams adopted a vegan diet after being diagnosed with an autoimmune disease is living proof that women can build muscle on a plant-based diet – and has been aptly dubbed the ‘plant-based powerhouse’. Such strength is down to both the quantity and variety of protein.

“In the UK, adults are advised to consume 0.75g of protein for each kg that they weigh – this equates to around 45g per day for the average female,” says Lily. “However, those leading a more active lifestyle may need to consume up to 1g per kg of body weight, or 1.5g for the very active.”

For strength training vegans, fellow nutritionist Jenna Hope stresses the importance of consuming a wide range of plant-based foods covering all amino acids since they are “essential for muscle growth and repair”.

Author of plant-based cookbook Naturally Stefanie and vegan fitness influencer Stefanie Moir says that her “whole physique has been built on plants” and, like Jenna, credits it to training hard while consuming “a large variety of plant-based proteins”. Her go-to meals include tofu scramble on toast for breakfast, lentil bolognese for lunch, and coconut Thai green curry for dinner.

MYTH: You will have less energy to strength train and lift weights

It’s understandable that many associate the removal of whole food groups (ie animal products) with lethargy, but this would only ring true if they weren’t replaced. A vegan diet switches out animal products for plant-based alternatives that contain nutrients proven to maintain the same level of stamina and endurance.

“If you’re consuming enough calories to support your training, then energy shouldn’t be a problem,” says Jenna. “Nuts, nut butters, seeds and healthy fats are a great way to increase energy if you’re struggling to obtain enough on a vegan diet.”

Stefanie concurs: “I have never struggled with energy loss – if anything, it is quite the opposite. I don’t suffer from afternoon slumps, post-food comas or delayed onset muscle soreness and my body recovers well from workouts. I train five-to-six times a week and have no issue maintaining this schedule.”

MYTH: You should eat the same amount of food

Where ‘diets’ were once synonymous with smaller food quantities, a vegan diet requires an increase in volume since plant-based foods are typically less calorie-dense than animal products. This is extra important when building strength as calories equate to energy that you’ll need to train.

Jenna explains: “In general, you should stick to your usual calories, but as plant-based foods tend to be lower in calories, you may need to increase volume. I recommend spreading this throughout the day in the form of snacks, rather than trying to increase portion sizes of main meals.”

Nut butter sachets, edamame beans and trail mix bars are all well-rounded sources to pick up on the go.

What you really should be eating before and after your workout

MYTH: You will need to take supplements to build strength on a vegan diet

Caveating vegan diets with supplementation is something you’ll see a lot of, but Jenna and Lily both take a food-first approach and argue for a balanced diet. There’s only one vitamin they suggest supplementing when strength training as a vegan: B12.

“Vitamin B12 is an essential nutrient with its main sources being animal products, therefore those following a vegan diet may need to consider supplementing to ensure they are consuming sufficient amounts,” says Lily. She cites “fatigue, anaemia, early dementia, increased risk of heart disease, nerve dysfunction, forgetfulness and lack of coordination” as symptoms of B12 deficiency – all of which would seriously hinder ability and increase risk of injury from strength training.

Not into supplementing? According to Jenna, the best vegan B12 sources are fortified milks and cereals, green leafy vegetables and high quality plant-based proteins, though she suggests a blood test with your GP to confirm whether you are nutritionally replete.

A varied diet also takes precedence for Stefanie. “The only supplement I take is a protein shake in my smoothies,” she says. “But this is something I do for convenience, not because I am vegan.”

The best B12 rich foods to eat, whether you’re a vegan or a meat eater

MYTH: You will be deficient in certain nutrients

The more frequent or intense your strength training, the more crucial it is to consume a full spectrum of nutrients. Granted, meat boasts a wide range but with clever consideration (and a few handy hacks), these can all be obtained on a vegan diet. Let’s start with the holy grail of energy and the thing that’ll help you train longer and lift heavier: iron.

Iodine – responsible for regulation of the thyroid hormone and metabolism – is largely found in cow’s milk and is another nutrient for vegans to monitor more closely, while deficiency is particularly detrimental to strength training with symptoms including fatigue, muscle cramps and joint pain. Look for plant-based milk fortified with iodine, or add seaweed to salads.

The rest? All readily available within vegan foods. Turns out animal-friendly strength training is totally legit.

Follow @StrongWomenUK on Instagram for the latest workouts, delicious recipes and motivation from your favourite fitness experts

Related posts:
01/07/2021 Fitness Comments Off on Don’t believe the myth – you absolutely can build strength on a vegan diet
Diets News