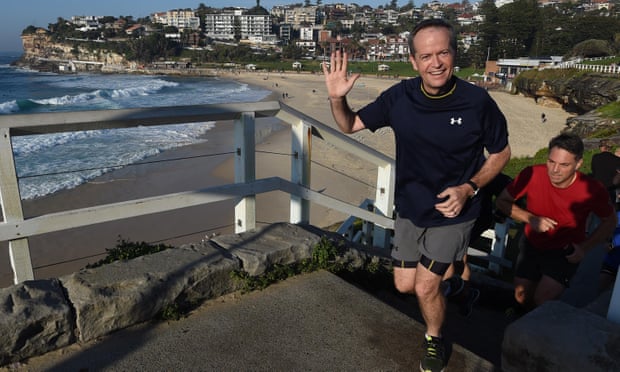 It was summer, 2012 and I was at a Starbucks in Columbus Circle, Manhattan, eavesdropping on the Australians in front of me in the queue.

They were journalists, gossiping about Bill Shorten. And they seemed a bit tetchy. I leaned as close I could without arousing suspicion; had Shorten been involved in Rudd-style topless bar hijinks? Or a Fraser-style pantless motel escapade?

Alas, no. The gossip was a bit disappointing. It transpired Bill Shorten was across the road in Central Park – and he was jogging. The journalists getting the best access to him that week in New York were those who were running with him.

Those who weren’t – who were more of life’s strollers – were getting Grande caramel lattes in Starbucks and moaning about their fitter colleagues.

The conversation stuck with me because it seemed terribly unfair that a serious scoop or high level contacts would be contingent on having good cardiovascular fitness. Was that the way it was going to be now? Survival of the fittest journalists?

Fast-forward and Shorten is still running. One can’t turn on the television without a shot of Bill shooting through the street, grinning through the sleet, with a voiceover punning that he is “running for office.”

Somewhere along the line (quite possibly with John Howard and his walks) we’ve conflated leadership and fitness. Would history have been different if we’d been ready to embrace leaders of different sizes? If Kim Beazley had been elected instead of John Howard?

Beazley himself has said that size does matter in politics. He told ABC in 2005:

Oh I’d like to be lighter. The cameras are unkind to those who are carrying a bit. One of the intriguing things as I go around and … bump into people in shopping centres and they say, ‘oh, you’re thinner than you look on TV’.

He also said that people were kinder to portly pollies in the past – weight was not an issue for Sir Robert Menzies, after all.

But today we’ve integrated and accepted the belief that in order to lead the country you have to have a certain body shape and fitness level.

Joe Hockey stapled his stomach to get it. John Howard power walked. Malcolm Turnbull fasted and drank Chinese herbs (he is also rumoured to work out at home in a Frank Underwood-style rowing machine). Bill Shorten and Julie Bishop run. Tony Abbott surfed, ran, biked and swam. Barry O’Farrell lost 40 kilograms on a treadmill – and shed the Fatty O’Barrell tag – before he won the NSW election to become premier. 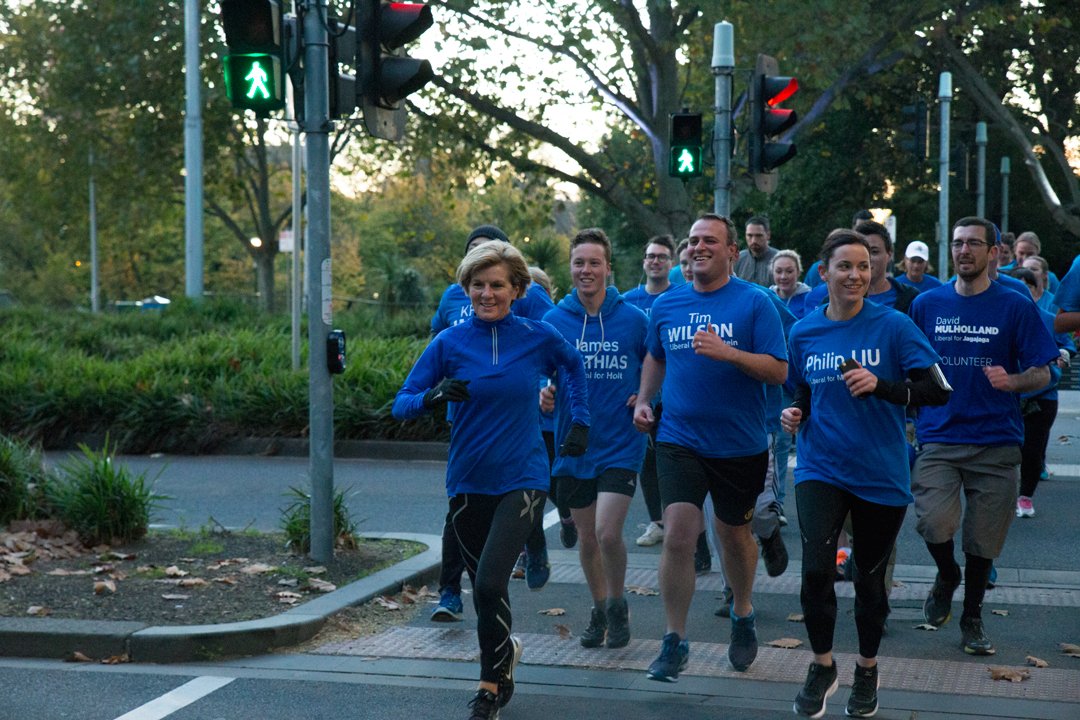 Imagine being led by an overweight person? It wouldn’t bother me in the slightest – but in sizest Canberra such a thing is unthinkable.

The implication is that if you can’t control your weight, how can you control the country?

What’s not acceptable is to have a lavish body, a body one might expect of a pollie: a body enlarged by business lunches, banquet dinners with heads of state and long hours sitting on planes, in parliament and in meetings.

If you do manage to sneak into the corridors of power packing some extra pounds, you will be asked about your weight on television like Clive Palmer was in Annabel Crabb’s Kitchen Cabinet, or attacked in question time like Kim Beazley (Wilson Tuckey to Beazley: “Don’t you call me weak and worthless, you big, fat so and so”), and lampooned in cartoons.

In implicitly agreeing on a physical ideal, there is the permission to tear down anyone who doesn’t live up to the ideal. 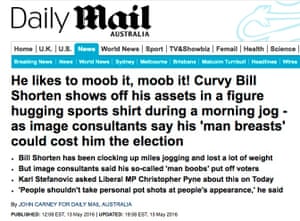 The Daily Mail showing itself to be an equal-opportunity body shamer whacked this headline over pictures of Bill Shorten’s body recently: “He likes to moob it, moob it! Curvy Bill Shorten shows off his assets in a figure hugging sports shirt during a morning jog – as image consultants say his ‘man breasts’ could cost him the election”.

“Curvy Bill Shorten”, “showing off his assets” whose “breasts could cost him the election”?

Here I was hoping his party’s asylum seeker policies would cost him the election.

Mark Latham also weighed in with this weird bit of body shaming:

Now, in this more enlightened era, Shorten has a chance to win some key marginal seats with a man boobs-led recovery.

He needs to start appearing on the campaign trail as a woman, pushing up his boobies in a lovely, low-cut designer dress.

Even the Australian put three reporters on the story about Shorten’s fitness regime:

For months Bill Shorten has been quietly negotiating a fog of early-morning sweat, fruit, muesli and restraint as the Labor leader has shed a heroic amount of weight in the lead-up to the election.

Shorten’s weight loss is imbued with a moral quality. It’s “heroic”. He’s praised for his “restraint.” No wonder politicians exercise so publicly, trailed by film crews – they are sending signals to the electorate that they are “disciplined” and “restrained”.

That’s what we value now: thin bodies that have been disciplined day in, day out.

A high level of fitness is to be encouraged among leaders for a whole range of reasons including increased stamina and clearer thinking. But our focus and judgement on the bodies of politicians and their exercise regimes is a sideshow – it’s empty calories compared to the protein of policies.