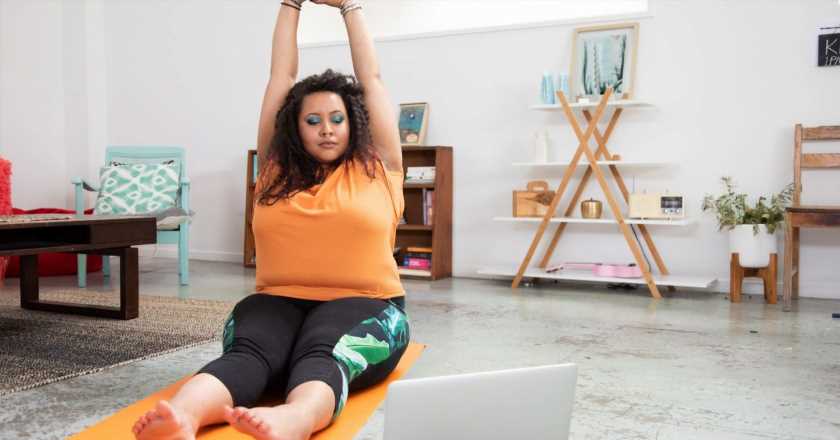 Irregular periods are something many of us live with, but what role can fitness play in helping our cycles even out?

Women plan their lives around their menstrual cycles. Having an irregular and painful period not only makes scheduling events more difficult, but it also results in additional stress and worry – something none of us need more of after the two years we’ve survived.

The question is: could we put all this trouble behind us by just committing to a workout plan?

The reality of weightlifting with periods and PMS, according to Team GB weightlifter Zoe Smith

What counts an ‘irregular’ cycle and unusual period pain?

According to the American Academy of Family Physicians, between 9-14% of women have irregular periods.

While the average menstrual cycle is 28 days, anything between 21 and 35 days is said to be normal.

Dr Deborah Lee, sexual and reproductive healthcare doctor at Dr Fox Online Pharmacy tells Stylist that any bleeding that occurs outside of this window is defined as an irregular period. That includes bleeding or spotting in between cycles, heavy or prolonged bleeding, absent period or bleeding after sex.

Period pain is something that most of us experience at some point in our cycles, but its intensity can vary greatly from person to person.

“Primary dysmenorrhoea (period pain) affects around 50% of women, and in 10%, the pain is so severe, usually for the first 1-3 days, that it interrupts their ability to function – sometimes meaning they miss work or school,” Dr Lee says. The pain can be felt in areas such as the lower abdomen, lower back, and the tops of the legs and thighs.

So, can exercise do anything to alleviate these issues?

Zoe Bray-Cotton has been a lover of yoga since she was 14. Having been on the pill for the best part of a decade, her primary reason for getting on the mat wasn’t regulating her cycle – but that changed when she decided that it was time to try for a baby.

“I expected to be able to come off the pill and get pregnant quite quickly. However, it can take quite a while for our hormones to find their own balance, I know it did for me,” says the 33-year-old. “During this time, I leaned into my yoga practice which I believe really helped to balance my hormones as well as reduce cortisol levels (stress hormones), creating a feeling of wellbeing.”

Bray-Cotton is an advocate for the wellbeing of women, which is why she launched the Yoga Burn system in 2014. A personal trainer and yoga instructor, she combines yoga elements with fitness, tailored towards the female body.

“We’ve supported hundreds of thousands of women through all different transitions us women go through, like regulating their cycle, trying to conceive, menopause and soon we will have a full prenatal series women can reach for as well,” she tell Stylist.

“Our community has certainly had success… when it comes to finding balance with their emotions, hormones and sleep too.”

After a year of flowing, she found that she was expecting her first child. Of course, it’s worth saying that yoga isn’t some miraculous fertility aid and may not work for everyone but Bray-Cotton believes that tapping into a more gentle form of movement worked for her.

Dr Lee says that exercise is recommended for menstrual cycle-related disorders by the NHS: “One of the reasons that exercise helps relieve pain is due to the effect on the sympathetic nervous system (SNS),” she explains.

“This is the involuntary nervous system that is switched on when we are startled – as in fight, fright and flight. When we are stressed, the SNS is permanently switched on, so we are living in overdrive. Menstrual pain is thought to be partially innervated by the SNS.”

Bray-Cotton believes that yoga is a great way to connect your body, breath and mind, which supports the nervous system. “Yoga poses help to release tension, improve flexibility, cultivate balance and build strength while also training our mind how to stay calm during uncomfortable situations.”

“It’s important to recognise that overdoing exercise or choosing very intense forms of exercise can have the opposite effect… so be sure to pick a routine that you enjoy and aim for consistency three times per week to start,” says Bray-Cotton.

Dr Lee notes that exercise may have specific benefits for the reproductive cycle but the reasons are “complex and not well understood”.

There are many studies available on how intensive exercise can make the menstrual cycle irregular or stop altogether. One study looking into female military cadets found that 98.3% of recruits’ regular cycle became irregular due to the intensive training they had to undertake during their first year at the US Military Academy. 10.3% of students’ cycles became mildly irregular, 35.3% moderately, 30.2% severely, and 22.4% extremely. The remaining 0.8% of the participants did not menstruate at all during the year.

Athletes who have an aggressive workout regimen often find their periods stop. “This is because of the effect of exercise on the hypothalamo-pituitary axis – the brain’s major neuroendocrine pathway,” Dr Lee explains. “This is an extreme example, but it shows that taking exercise affects the production and transmission of neurotransmitters and hormones.”

So, how much training is too much?

“As the principle is that moving more is improving pelvic blood flow, any exercise is likely to be beneficial for improving period pain. What is inadvisable is remaining sedentary.

“For best results, exercise needs to be taken regularly during the month, including during menstruation, so it’s important to find an exercise you enjoy and stick to it,” Dr Lee concludes.

Want to start moving slower? Have a go at one of our 15-minute mobility classes, which aim to stretch, strengthen and lengthen.

Related posts:
10/22/2021 Fitness Comments Off on Can a fitness regime reduce period pain and regulate the menstrual cycle?
Diets News