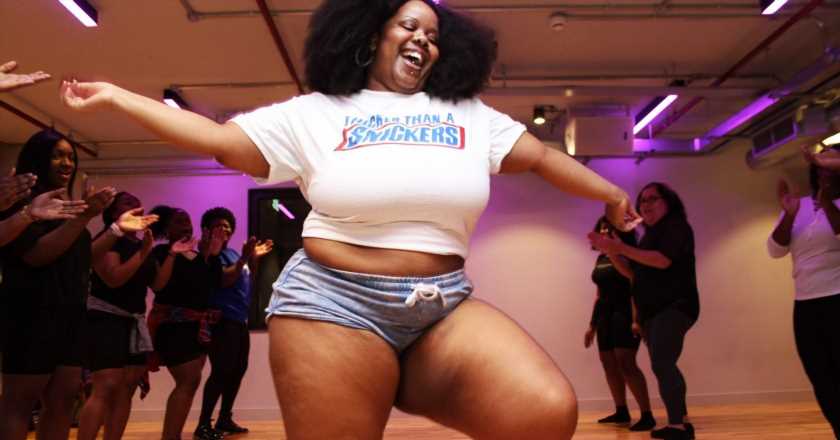 If you think that fat-shaming in the fitness world is old news, think again. Even after winning an Olympic medal, champion weightlifter Emily Campbell couldn’t find sponsorship. Why? Because she’s bigger than your average sprinter.

Imagine getting to an Olympic level in sport and not being able to get sponsorship from activewear brands because you don’t meet the conventional image of an elite athlete. Emily Campbell won an Olympic weight lifting silver medal in Tokyo this summer – Britain’s first in the female sport.

She’s also a Commonwealth medallist and European Champion, and yet, despite her significant strength and success, she still gets challenged by doctors about her BMI and, unbelievably, brands aren’t queuing up to work with her.

“There is no big brand out there that wants to take a chance on signing somebody like me because I am different,” Campbell tells Stylist. “I’m not fussed by what people say, but a lot of companies are bothered about the backlash, and so they think it’s safer to go with somebody who looks the norm.”

It doesn’t matter what she’s achieved, believes in or stands for, Campbell believes: “It’s not safe to go with someone who looks like me as it might not go down well with the public.”

What’s so different about Campbell that makes her a marketing risk, you might be wondering. Well, it’s simply this: she’s bigger – and stronger – than some of the track and field athletes you might be used to seeing.

Fitness brands are failing women of all sizes

In 2019, Nike unveiled a plus-size mannequin at its flagship store on London’s Oxford Street which journalists like The Telegraph’s Tanya Gold claimed “sold women a dangerous lie” – that you could be fat and fit.

Add to that the fact leading activewear brands still only offer sizing up to a UK 16, which means that if you want to workout for your physical and mental wellbeing as a person living in a larger body, you face a hurdle before you have even put your trainers on.

“The bottom line is that brands don’t have to make bigger sizes,” says Campbell. “But when the same businesses try to jump on the body-positivity bandwagon because it is a trend, and they want to get more customers, it becomes incredibly frustrating.

“They might say that they want to make every girl feel included but if I can’t buy an outfit from them, how are they going to do that? The hardest part of your fitness journey is that first day you walk into the gym, into the studio, onto the street or out in the field. You are so self-conscious that everybody is looking at you and only being able to wear an oversized T-shirt and a pair of horrible leggings isn’t going to help.”

What we look like still matters within the fitness world

Despite efforts from the fitness community to give space to people with different bodies, backgrounds and appearances, it’s clear – at least to exercisers like me – that what we look like is still a big issue in 2021.

Many women take part in exercise as part of their overall physical and mental health. It makes them feel strong, healthy and happy, and yet, it is often assumed that the goal is to change our bodies in some way. If you live in a bigger body, the goal must be weight loss. We face unwanted advice, backhanded encouragement and judgement, even if we’ve been moving our whole lives.

“My relationship with my body has changed a lot,” says Aisha Nash, an anti-diet yoga teacher. “It used to be all about judgement, trying to diet and fitting into a specific mold of what people expect a body to look like.”

“As a plus-size, non-binary person, exercise is form of self-love“

It was only when she realised that women of all body shapes are held to unrealistic standards, whether they’re slim or not, that she started to let go of the diet culture stick.

“It was while working across a range of yoga studios that I noticed that women who were far smaller and daintier than me were holding themselves accountable to a body type that they already had. I realised that if these people who have attained this ‘perfect body’ ideal were still not happy, then no matter how much I tried, then changing my own body would not make me happy either.”

Aisha set up her own yoga practice after experiencing fat phobia in other yoga studios.

Nash turned the energy she was using by living in fear of food towards learning about health at every size: “The mood I bring into my yoga classes now is acceptance,” she says. “Your body is your body. People who are very able get attached to what our bodies can do, but a phrase I like to bring to my classes is that we are only temporary able.

“At some point, something is going to take away our ability to do a lot of things. What is going to happen if you are attached to what your body can do and you base your entire self-esteem off of that? We are going to age. Out ability is going to change. We forget this because we live in such a ‘everything must look pretty’ sort of world. Maybe just start your acceptance with – I have a body!”

Plus-size fitness: 7 size-inclusive activewear brands to work out in this season

Overcoming the urge to use exercise as punishment

One behaviour common to those navigating their health in bigger bodies is seeking punishing activities. The idea that exercise must be miserable and uncomfortable to be a benefit is something that body freedom coach Gillian McCollum is familiar with. “I was deep in disordered eating and using exercise for punishment or a way to earn or compensate food,” she says. “It took me a long time to escape it.”

That hard-fought-for freedom is why McCollum now helps women heal their relationship with food and their bodies. “My body-positive yoga classes help women find a movement practice that feels good, peaceful and nourishing in their body. It isn’t about punishment; it is about meeting yourself where you are at,” she explains.

A lot of the people living in larger bodies who come to her classes are “super flexible and strong”, McCollum says. It’s not their ability that stops them from engaging in activity but the snobbishness and exclusivity that the yoga world has spent the past 30 years ensconced in.

For runner Martha Lowe, changing the focus from moving her body for weight loss to moving her body to feel good was what led her away from punishing behaviour and towards running – because that was what she enjoyed. “I was itching to go out and do something,” she says.

“I had struggled to find an exercise I enjoyed and then I asked my sister if she would join me for an intermittent running session and discovered that I liked it. I downloaded a Couch to 5k app and built up my running. It was brilliant for my mental health, getting out in the fresh air; moving my body for myself felt really good.”

After signing up for a Parkrun and completing it, Lowe was motivated to join a running club. “I joined a beginner weekly running session and loved running with others. Everyone was friendly and inclusive – I now run two-three times a week. It has completely changed my relationship with my body.”

Acceptance, focusing on how we feel rather than what we look like and seeking out sports that we enjoy are the keys to unlocking exercise in a bigger body. If you can’t find something that suits, create it yourself. Personal Trainer Em Barrett set herself up to support others when she couldn’t see people like herself training others.

Em decided to set up her own PT company after gyms asked her to submit photos before taking her on.

“The training staff at my gym were lovely, but they didn’t engage me,” she says. “None of them looked like me. A lot of people go to the gym to improve their body, but I didn’t want washboard abs I wanted to look strong, feel good and not think about the aesthetics. So, I thought, if no one else is offering this, why don’t I do it?”

Barrett says that she avoided gyms who asked for pictures of her before accepting her PT services – knowing that if aesthetics mattered to them, they weren’t the right fit.

She’s not the only one who’s gone through that process; Trina Nicole is the founder of the UK’s first plus-size dance class, The Curve Catwalk. After rediscovering dance, she was able to move from a place of judgement on her body to a place of appreciation and expression. She started attending and exploring different classes around London but felt ostracised and unwelcome.

“Sometimes it was just an energy,” she explains. “Sometimes it would be a backhanded comment. I consider myself a confident person, but in some of those spaces I would completely shrink myself and hide at the back. I found I didn’t want to move my body too much because it jiggled and wobbled; I couldn’t express myself the way I wanted to.”

Trina set up her own dance company after various uncomfortable experiences at other studios.

That rejection became a catalyst for Nicole to establish her own thing. “Dance classes in London were either offering technical training or intense workouts, I just wanted to move my body and have fun.”

Knowing she could do a better job, she set her sights on creating something where everybody felt welcomed and could leave with an excited feeling: “I never intended it to be for plus size. I ran some classes for some friends, they told their friends and with word of mouth that I was leading the classes it meant something for people in bigger bodies to see me being active and for it not to be a punishment.

“That is the key really, whatever you are doing, accept and embrace who you are and move your body from a place of enjoyment.”

Related posts:
11/19/2021 Fitness Comments Off on 6 women share what it’s like to navigate the fitness world in bigger bodies
Diets News