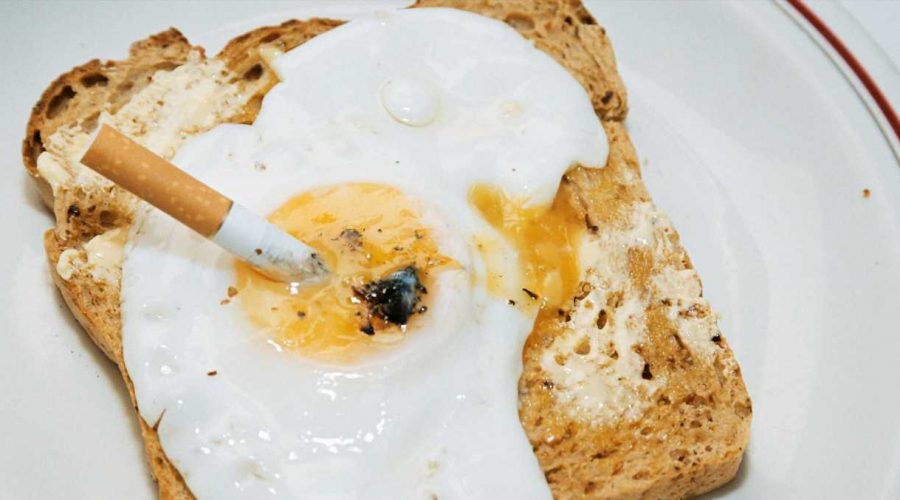 Well, they are according to one allegedly vegan woman who took to Twitter and shared this surprising claim four days ago which, unsurprisingly, invited a ton of backlash.

“One egg = five cigarettes!?” wrote @PlantBasedBarb. “Egg yolks are loaded with cholesterol. A medium-sized egg contains 186 mg of cholesterol, which is 62 percent of the recommended intake. Eating eggs is worse for your health then smoking!”

One egg = five cigarettes!? Egg yolks are loaded with cholesterol.
A medium-sized egg contains 186 mg of cholesterol, which is 62 percent of the recommended intake.
Eating eggs is worse for your health then smoking!

@PlantBasedBarb’s tweet sounds a lot like a claim made in 2017’s What The Health, a controversial Netflix documentary created by the same people behind the sustainability doc Cowspiracy.

The film’s site describes itself as “a surprising, and at times hilarious, investigative documentary that will be an eye-opener for everyone concerned about our nation’s health and how big business influences it.”

But the movie came under fire after its release for linking meat and milk to cancer and, as Barb pointed out, claiming the cholesterol levels in eggs are capable of producing plaque in arteries that are as detrimental to one’s health as smoking five cigarettes.

Since her original post, Barb has touted tofu to her followers as a prime vegan egg alternative (which, generally speaking, not a bad idea).

But, even after her suggestions about tofu swaps, Twitter was still not having it. People flooded the post with comments about how ridiculous they found Barb’s tweet, encouraging her to check her facts and rethink how blindly she believes the information included in the film:

Sorry, but you are so poorly informed, it’s genuinely frightening. This is based on ideological nonsense with zero science to back it up.

Eat eggs, everyday if you wish – they are superb species appropriate nutrition for Homo sapiens.

You might want to do a bit more research than watching a heavily biased Netflix documentary.

One even questioned Barb’s qualifications writing, “I don’t see dietician or doctor in your profile.”

Strange – I don’t see dietician or doctor in your profile. Eggs had been blamed for their cholesterol but recent evidence shows that they aren’t a problem and are in fact recommended as a source of protein and other nutrients. You can be a vegan and factual.

In fact, according to a Keri Gans, RD, author of The Small Change Diet, who IS a dietician and who previously spoke to Women’s Health, you can go through an entire carton of eggs in one week worry-free. “For the average person, two eggs a day is totally fine,” she said.

And while Barb’s information about how much cholesterol eggs are packing is correct, it’s actually not the cholesterol in eggs that is responsible for raising blood cholesterol levels. Instead, it’s saturated fat, not dietary cholesterol that impacts “bad cholesterol,” according to recent research.

“If you’re concerned,” says Sonya Angelone, a registered dietitian, “talk with your doctor to determine how eggs should fit into your life.” They’ll asses your diet and take into consideration any health concerns such as heart disease. But when it comes to “the average healthy person,” she says, as long as you keep an eye on your cholesterol and your saturated fat intake (looking at you, bacon), eggs are not the enemy here.

So, if you’re into ’em, don’t let Barb egg you on. Eat them in moderation and consider what you eat them with—as you would anything else—and you’ll be just fine.