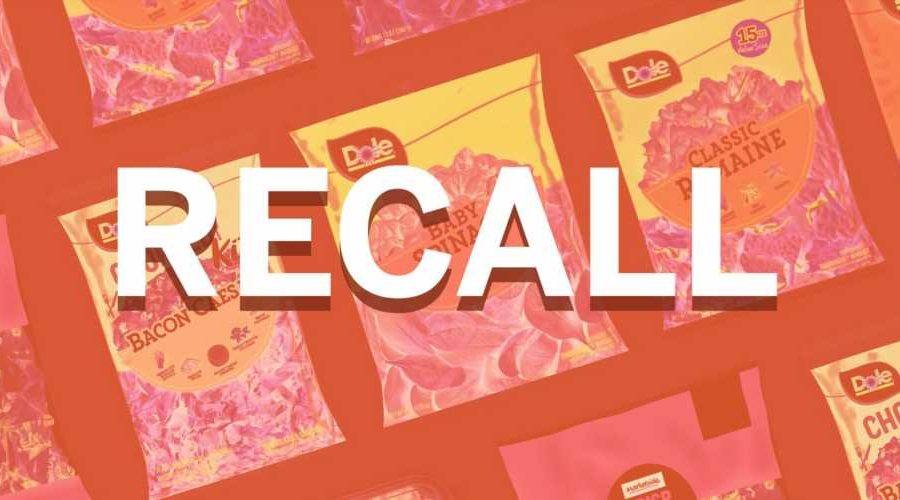 If you have bagged salad or greens in your home, you'll want to check the label.

In a food safety alert released today, the Centers for Disease Control and Prevention (CDC) has also announced it is now investigating the listeria outbreak that they've linked to packaged salads produced by Dole.

The voluntary recall is connected to Dole's Bessemer City, North Carolina, and Yuma, Arizona, production facilities after Listeria monocytogenes was found in a package of Dole-branded Garden Salad at the North Carolina facility and a package of shredded iceberg lettuce at the Yuma facility, per the US Food and Drug Administration (FDA).

Production has been halted at both facilities to allow for "an extensive cleaning and sanitation protocol," the company said in the recall announcement.

Products in the recall have a lot code that starts with either the letter "N" or "Y" in the upper right-hand corner of the package. They also have a "Best if Used By" date between November 30, 2021, and January 8, 2022. Impacted products were distributed to the following states:

The FDA has a full list of recalled products on its website. If you have any of these salads at home, Dole is urging you not to eat them and to throw them out immediately. The CDC also recommends that you properly clean your refrigerator, items, and surfaces that may have touched the recalled products.

This isn't the first time Dole has had a bagged salad recall due to listeria concerns lately. In early November, the company recalled bagged salads that were sold in 10 states over Listeria monocytogenes concerns. It's also not the first time salad products have been recalled this week due to possible Listeria monocytogenes contamination. On December 20, Fresh Express recalled more than 100 different products distributed across 19 states for the same concern.

As for this most recent recall, the FDA points out that "no products produced from Dole facilities in Springfield, Ohio (production/lot codes beginning with "W") or Soledad, California (production/lot codes beginning with "B") are included in these voluntary recalls. In addition, no other Dole products, including 'ready-to-eat' salad products, fresh fruit, and field-packed fresh vegetables, are part of these voluntary recalls and are safe to consume." Still, as part of its outbreak investigation, the CDC says it will be determining whether additional products may in fact be contaminated with Listeria monocytogenes.

Listeria monocytogenes is a bacterium that causes a serious infection called listeriosis, according to the CDC. People typically develop listeriosis after eating contaminated food, though pregnant people, newborns, older adults, and people with weakened immune systems are more likely to get sick.

Symptoms can vary depending on whether someone is pregnant or not. Pregnant people usually develop a fever and flu-like symptoms, like fatigue and muscle aches, along with a higher risk of miscarriage, stillbirth, premature delivery, or life-threatening infection of the newborn, the CDC says.

If you think you've had one of the recalled salads and you develop a fever or any other symptoms of listeriosis over the next two months, the CDC says it's a good idea to call your doctor. Listeriosis can be treated with antibiotics, but it's important to act fast. If you've eaten one of the recalled products and feel fine, the CDC says you probably don't need any tests or treatment. But you can always check in with your doctor just to be sure.

Related posts:
12/23/2021 Diet & Food Comments Off on Dole Is Recalling 180 Salad Products Due to a Possible Listeria Contamination
Diets News