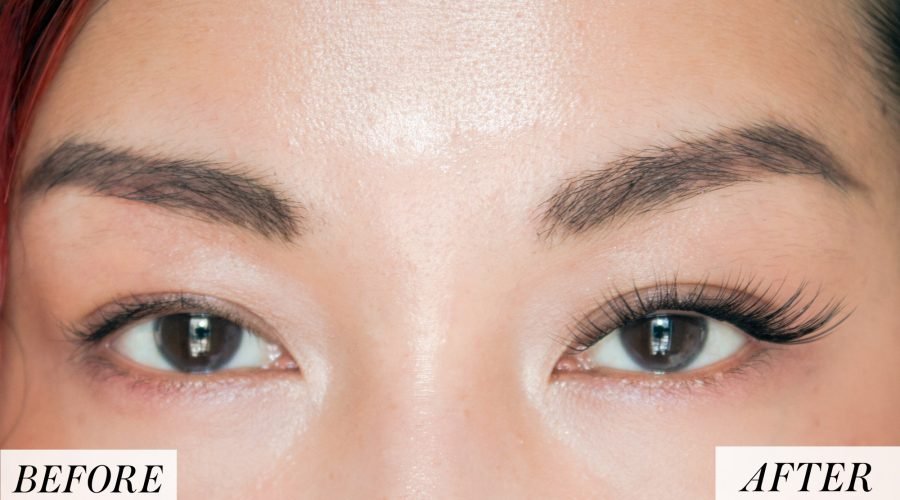 As long as I've remembered I've wanted Bambi-esque lashes: long, curled, and fanned-out lashes that wave hi and bye to you with the wink of an eye. My DNA has decided that I will be just fine with these crooked twiglets — and thusly, that has led to my lifetime study of lash architecture. At least until someone invents a way to permanently stick some doe-eyed fuzz atop my eyeballs for good. Somewhere in the space between mastering false lashes, eyelash extensions, and lash lifting, there lies a Goldilocks solution to being pressed for time and not rich enough to keep my lashes indefinitely extended. It's called Lashify and it's a whole damn system.

It may seem really complicated, but once I figured it out, it gave me the most natural-looking Bambi flutterers to I Can't Believe It's Not Butter degrees of realism. The main difference with Lashify is that you apply the lashes under your natural lash line, not over, as you would with traditional false lashes. It sounds like it wouldn't work, but I guess that's why it's a system. The little lash clusters, called gossamers, are super, super light, so that's why they can defy gravity, with the help of a flexible adhesive.

Speaking of system, here's the starter kit, which has everything you'd need to promptly get yourself addicted to these.

Everything inside the Lashify Control Kit

The Lashify Control Kit comes with two sets of gossamers, a dual-ended adhesive (one side is clear and the other is black), an application tool, and the sealing clear coat. You can choose which style of gossamers you'd like as well. They come in four different lengths (differentiated by millimeter) and three different styles: A means "amplify," which are the most natural-looking lashes. B means "Bold," a slightly more voluminous and dramatic look than the Amplify ones. Last comes C, which stands for "curl" and is relatively self-explanatory.

You can see how the gossamer styles differ here

Watching YouTube tutorials and reviews of this kit are really all over the place, but the concept is easy to understand, if not the easiest to execute at first. There's a bit of a learning curve, but once I rounded it, now I can pop these suckers on in under five minutes. Let's begin, shall we?

1. Apply the adhesive to your lashes.

It seems backwards, right? The Whisper Light Dual-Sided Bond has a narrow mascara wand on each end. Choose your adventure: clear or black. I find that black can give a slightly more voluminous look, but only just. You have to kind of stamp the wand at the base of your lashes without running the wand through the lengths. This is a little difficult for me simply because I have small eyes and the wand is much longer — meaning, it's inevitable that I'll get some on the middle of my lashes or the tips of the ends unless I dab it on with the tip of the wand instead (also an option).

There isn't really a set time that you need to let the adhesive dry, like with traditional eyelash glue. The time it takes you to select your gossamer and position it is enough time. The Fuse Control Wand (those really big tweezers that look almost like forceps) is shaped with a curve to hug your eye so that you can, if you want and are able to, put on multiple gossamers at once, but I prefer to reverse it the concave angle and apply them individually for more control on spacing.

Here I applied a set of Amplify gossamers with the longest ones at the ends and worked my way down the lengths as I got closer to the inner corner of my eye.

I used two A14 gossamers, an A12 and an A10 moving towards my inner eye corner to create a gradient in length.

3. Secure those fringes down.

Once I was happy with the placement of the gossamers, making sure there weren't gaps between the bands and they were in a linear formation, I gently clamped the base of the gossamers and my natural lashes together with the application wand, just to squish them into the adhesive a bit more. The adhesive is actually flexible enough that if you mess up, it's really easy to remove and replace the gossamer. They are really delicate though, so make sure when you're removing them to grab all the little hairs in one tug because a few times I only grabbed a partial amount and ended up separating them from the band. Whoops. The Control Kit comes with a sealing coat, which I've used before and I haven't, and I don't think it's totally necessary to keep them on unless you're planning on wearing these babies for days (which the brand says is possible).

Now look at the difference, once I've completed one eye:

4. Repeat on your other eye and proceed to scream.

In the best way, I mean. I was so impressed with how natural these look. Also, you can't feel them. Trust me, I blinked super hard, crinkling my eyes to give them the squeeze-test and they didn't budge or feel weird at all. There's no gap in between your lashes and these since they're underneath your lashes, so they're actually quite undetectable. I could wear these every day in place of mascara and that would at least save me from worrying about smudging.

I mean…look at how good those lashes look. And to think, I could just feather my own lashes with these temporary extensions anytime (and I do) without struggling with trimming false lash strips and worrying that the band looks really obvious every time I look down. There's nothing wrong with a nice Lady Marmalade-looking feather boa of falsies but for the most part, I'm pretty stoked to have a system of really easy to apply and really invisible to detect false lashes that should I happen to do a night thing whereafter I crash with my makeup on, at least my lashes will be looking bomb in the morning.

I refuse to sleep in them, mostly because the process of removing the rest of my makeup and washing my face while not rubbing my eyelashes seems unnecessarily complicated, plus I may roll over and crush them in my sleep. (In which case, I'd be sad.) You can re-use the gossamers quite a number of times if you take care of them by cleaning bits of the adhesive off the lashes with micellar water, or simply by brushing through any clumps with a clean spoolie brush. They're $20 a pack and you get a dozen gossamers per cartridge when it's time for a refill. Lashify also has a membership program for the daily users if you decide to really commit yourself.

Related posts:
10/12/2018 Beauty & Balance Comments Off on I Tried Lashify's Famous False Lash System — and All the Rumors Are True
Diets News