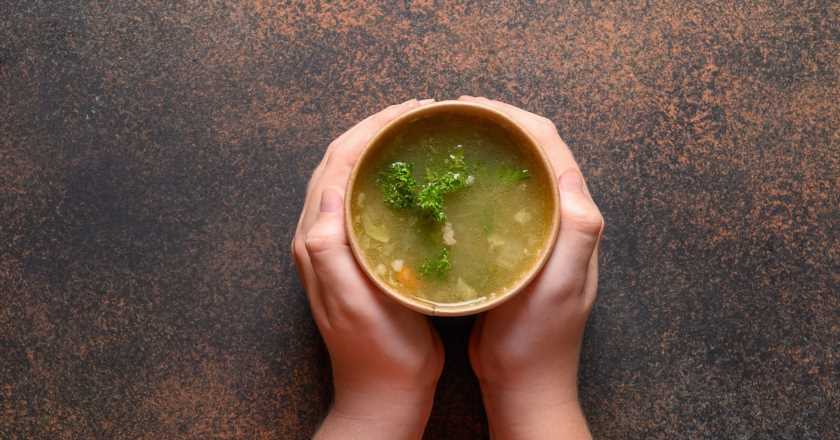 Is bone broth really as good as people say it is? We asked nutritionists to explain the benefits of meat stock – and the answer is surprising.

Every so often, a seemingly unexpected food becomes touted as a superfood or cure-all. It’s happened with protein powder (promising to build infinite muscle) and even with turmeric – as yellow lattes promised to reduce inflammation. Now, it’s happening with bone broth, apparently the antidote to everything from gastritis to bad sleep – and everything in between.

Celebrities, nutritionists and influencers alike are touting the benefits of it, but bone broth has actually been around long before social media wellness. The question is, is it really as good for you as you’re now hearing it is?

What is bone broth?

Bone broth is what is left after boiling animal bones, ligaments and tissues. Sound familiar? Yep, stock and bone broth are pretty much the same thing, according to registered nutritionist Rhiannon Lambert: “bone broth and stock are very similar, but the former tends to be cooked for a much greater period of time and should have a thicker consistency.”

One thing for sure is that a stock cube is very different from this sort of fresh stock that people refer to for the health benefits – a pre-packaged cube tends to just be flavouring, rather than any of the actual goodness. Store-bought bone broth might also be one to miss, too, as it’s particularly expensive when compared with making your own from Sunday roast leftovers.

What are the benefits of bone broth?

“Animal bones are rich in lots of different vitamins and trace minerals that we need to build and strengthen our bodies,” explains nutritional scientist Toral Shah. These nutrients are released when the bones and tissues are boiled, leaving behind a stock that’s rich in the good stuff – including potassium, magnesium and calcium. “Fishbones are also high in iodine, which we need for healthy thyroid function and metabolism,” Toral says.

“Connective tissues and ligaments are also rich in glucosamine and chondroitin, which are needed for our joints and ligaments to heal from injuries, arthritis and osteoporosis. The marrow has got a lot of vitamins too, such as vitamin A, vitamin K, zinc, iron and omega-three and omega-six fatty acids. It’s also rich in collagen, which is why if you boil stock down, it will turn into a jelly,” Toral explains.

Plus, bone broth could help you deal with lockdown’s sleepness nights. “Certain amino acids found in stock, such as glycine, can potentially help you to relax and promote sleep,” Toral says.

How gut health affects our emotions and mood

Of course, anything high in vitamins and minerals is great for our overall wellbeing, but Toral says the real benefits lie in gut health. “When we think about gut health, it’s not just the bacteria we need to consider, it’s also the lining of the gut,” she says. Toral explained that a lot of processed foods can damage this mucosal barrier, “which can allow other things to ‘leak’ into your bloodstream. Stock has got a lot of the nutrients needed to repair it, in particular the collagen and gelatin.”

“There is no one thing that is going to rescue us, but we are starting to understand the role gut health plays on physical and mental health and disease,” she says. Rhiannon echos this, saying that “it is about what you eat in your diet every day as a whole, not just a bone broth. I often see bone broth being hailed as a miraculous food to solve many ailments, but the truth is it is just a nice nutritious liquid.”

It’s also important to bear in mind that the quantity of the nutrients in your bone broth will depend on the quality of the meat, how long you cook it for and what the animal ate. “If you want to make this yourself, make sure that the meat you buy is free-range, organic, pasture-raised and, if it’s beef, that it was grass-fed,” Toral says.

And on that note, the other benefits to serving up bone broth are about more than just us. “It’s a brilliant way of using up food,” she says. “Food waste is the third biggest contributor to greenhouse gases, so why don’t we use all this stuff instead of throwing it in the bin? I save my chicken carcass after having a roast dinner and make a stock with it. That way, at least you’ve used all of the nutrients you can get from it. Then you can compost the bones afterwards.”

How often should you have bone broth?

Some may say sipping pure bone broth is the key to a healthy lifestyle, and while this can be “a comforting drink” according to Rhitrtion, she says that you can also add it into meals.

Toral also thinks that bone broth should be incorporated into a balanced diet. “It can form the base of a delicious soup, ramen, or bolognese. Bone broth has been a part of cooking for a really long time and is famous for its flavour,” she says.

Of course, if you’re a vegetarian or vegan, bone broth isn’t for you. But that doesn’t mean “you can’t heal your gut or get these benefits from a really heavily forward diet,” says Toral. Just make sure you eating a variety of foods and checking in with your doctor regularly.

So while bone broth isn’t the be-all and end-all of your health, it appears that it holds up as a wellness trend done right – and one that actually tastes good.

Related posts:
01/26/2021 Fitness Comments Off on Is bone broth actually full of benefits, or is it just expensive stock?
Diets News