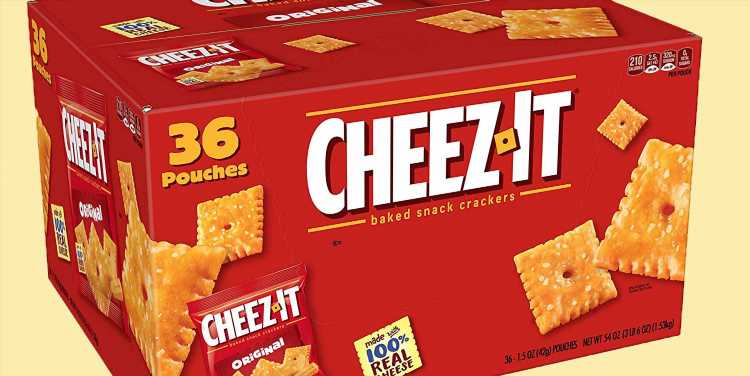 Amazon Prime Day is truly the gift that keeps on giving. Want some Bose Headphones? They’re $1oo off! How ’bout a weighted blanket? Nearly half off! Or what about…a giant Cheez-Its box? $8!!!!! You’ll need the snacks to stay fueled for all that shopping. Trust us.

In case you, I don’t know, live under a rock, I’ve got news: Amazon is hosting its epic annual Prime Day sale. And this year it’s lasting a whole 48 hours (but today is the second half of that chunk of time). For Prime Members (if you’re not one already, wtf are you doing???) there are millions of deals in nearly every department. It’s basically like Black Friday, but you don’t have to brave the terrifying crowds, and it all arrives perfectly packaged on your doorstep two days later.

And while sure, appliances sound great and all, will they really bring you the same joy as this epic, oversized Cheez-Its box? Doubtful. It comes with 36 individual packs for snacking on the go.

If you do the math, that’s 22 cents per bag. It would be economically irresponsible to *not* capitalize on this offer. And since we don’t know how long they’ll be available, you’re gonna want to hurry.

The Cheez-Its aren’t your only opportunity for food-related savings, either. Not only are there a bunch of other snack sales happening directly on Amazon, but Prime Members also get major Whole Foods savings. Through July 16, if you spend $10 at Whole Foods, you score a $10 Amazon credit. There are also different deals every day of the week, but right now, they’ve got 50 percent off chocolate and butter mini croissants. Sounds like I need to sneak out of the office and book it straight to the grocery aisles. TTYL!