The ketogenic diet is known for being restrictive. The low-carb, high-fat diet only allows you to get about 10% of your daily calories come from carbs — and to maintain ketosis (the process by which your body uses fat as an energy source rather than carbs), dietitians say it’s best to keep your carb intake between 20-30 grams per day.

Naturally, this means you’ll have to ration out your carbs for when you really, really want them. This means that you probably won’t be drinking your favorite sugary beverages on the Keto Diet. Even so-called “healthy” drinks are chock-full of carbs: an eight-ounce glass of orange juice, for instance, has 27 grams of carbohydrates.

So what can you sip freely and what should your avoid? Here’s a handy keto-friendly beverage guide.

Can you drink juice on the keto diet?

Only if it’s diet or reduced sugar juice. Most fruit juices are high in carbs, which makes them almost impossible to drink on the Keto Diet, according to Dr. Mike Israetel, a sports nutrition consultant and former professor of exercise science at Temple University in Philadelphia, PA. Case in point: eight ounces of cranberry juice has 30 grams of carbs. Apple juice? That’s roughly 24 grams of carbs.

That said, there are diet or reduced sugar juices that contain minimal carbohydrates. These products are packaged similarly to the full-calorie versions, so Israetel says you’ll need to read the nutrition label to ensure your juices are really low-carb.

Can you drink tea and coffee on the keto diet?

Yes. Plain, unsweetened coffee and tea served black are keto-friendly. If you drink your coffee with milk, however, that may be a problem, as one cup of whole milk has almost 13 grams of carbs. If you’re on the keto diet, Israetel recommends using heavy cream. A tablespoon has less than one gram of carbohydrates. There are even new, flavored creamers specifically for people who miss flavored coffee or tea on the Keto Diet. Try nut pods French vanilla dairy-free creamer ($14.20 per pack of 4, buy it here). Be careful of bottled coffee drinks, which may be loaded with carbs. Good, on-the-go option are unsweetened sparkling teas, like Sound and BOS, that are super flavoful without added sugar. Coffee addicts have plenty of options unsweetened options, like RISE.

Can you drink soda on the Keto Diet?

No, but diet soda is OK on keto in moderation. Unsurprisingly, regular soft drinks are out, as a single 12-ounce can of Pepsi has 41 grams of carbohydrates. If you want to satisfy your soda craving, you’ll have to opt for diet sodas, which use artificial sweeteners. The same serving of Diet Pepsi ($4.99/pack of 12, buy it here) has zero carbs. Those who prefer natural sweeteners may want to check out Zevia, which uses Stevia to create calorie-free versions of cream soda, root beer, and cola ($24.99/24 pack, buy it here).

According to Israetel, the fake sugars won’t knock you out of ketosis. But he does say that artificial sugars, in addition to raising numerous health concerns, may trigger cravings that cause people to eat more. Numerous studies in insects and mice have linked overeating to consumption of synthetic sugars, presumably because the substance triggers cravings for more sugar, Scientific American reported.

Can you drink booze on the Keto Diet?

Not really. Hardcore keto followers may want to avoid happy hour altogether, as alcohol “stops fat loss dead in its tracks,” Israetel says. Drinking alcohol temporarily bumps you out of ketosis, and it’ll also mean that you’ll get drunker faster, so you have to be careful.

Don’t want to give up booze, but still want to burn fat? Beer and wine are high in carbs, so you’ll want to stick to liquor, like vodka or whiskey, and drink it on the rocks. Going out for cocktails will also prove difficult, but you can easily make a low-carb mojito or margarita at home.

Can you drink protein shakes on the keto diet?

Yes. Protein shakes are an easy on-the-go breakfast for keto dieters who can’t just pick up a smoothie. In fact, Israetel says chocolate protein powders make a great addition to coffee if you’re used to picking up a mocha on your way to the office.

Of course, not all protein powders are low in carbohydrates, so you’ll have to check the label. Israetel recommends a powder that contains casein protein, which is digested slowly to help you stay full longer. Or, you could try a protein powder formulated to be nearly carb-free for keto dieters.

One scoop of Perfect Keto protein powder ($37.04, buy it here) has only a single gram of carbs.

Can you drink almond milk on the keto diet?

Yes. However, you’ll want to double check the label since some almond milks have added sugars that drive up the carbs. Plain unsweetened almond milk, like this one from Elmhurst, only has three grams of carbs per cup.

Can you drink soy milk on the keto diet? 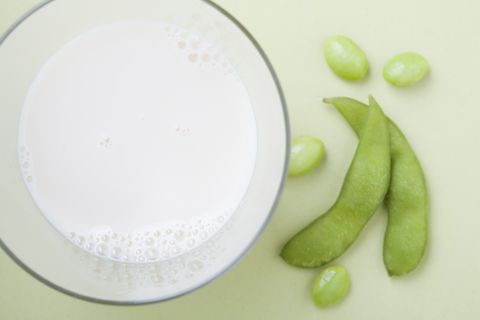 Yes! Unsweetened soy milk is a great alternative to traditional milk and won’t eat up your carbs. For example, one cup of regular unsweetened soy milk contains four grams of carbs. However, you’ll want to make sure to purchase unsweetened or flavored varieties as certain options can drive up carb count–and kick you out of ketosis.

Can you drink dairy milk on the keto diet?

Yes, but you’ll have to be careful of serving size! Be sure to pick whole milk for the higher fat content and measure how much you drink. A single cup of whole milk has almost 12 grams of carbohydrates, which takes up nearly half of some dieters’ daily carb allowance.

Can you drink matcha on the keto diet?

Yes, and it’s a great for people who miss their favorite sugary Starbucks drinks. Of course, you’ll have to check the label to ensure there’s no added sugar, but many brands offer low-carb mixes. For example, RSP Matcha Bomb only has two grams of carbs per scoop.

Can you drink milkshakes on the keto diet?

Yup! Typically high in fat, milkshakes could be keto-friendly if prepared correctly. You’ll want to use low-carb bases–try mixing unsweetened almond milk and heavy cream. Then, add a tablespoon of nut butter that’s lower in carbohydrates, like FBomb Macadamia & Pecan, which only has four grams of carbohydrates per serving. You can’t add sugar, but stevia drops are a keto-friendly sweetener.

Can you drink smoothies on the keto diet?

Only if you’re super careful about measuring ingredients! You’ll need to pick a low-carb base like unsweetened almond milk, add in a keto-friendly matcha or protein powder, plenty of ice and only a small amount of fruit. Berries have the lowest carbs, and are the safest bet. For example, a half-cup of blueberries comes in at around 10 grams of carbs. Be warned: enjoying a smoothie means you’ll have to skimp on carbs for the rest of your meals and snacks.

Can you drink energy drinks on the keto diet? 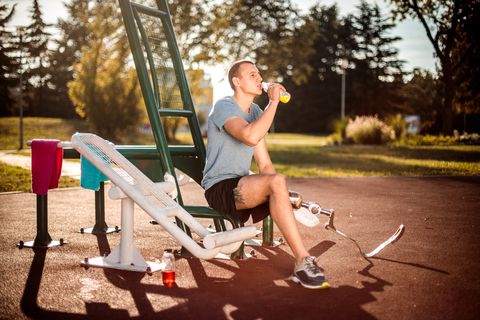 This is another situation where you need to pay attention to labels. Some energy drinks can have upwards of 30 grams of carbs, so you’ll need to choose a sugar-free option, which lowers carb count. Zevia energy drinks are sweetened with Stevia and include no calories.